He singles out North Korea, Iran, Syria and Venezuela as 'scourge of our planet today'

"The scourge of our planet today is a small group of rogue regimes," he said. "No one has shown more contempt... than the depraved regime in North Korea.

"The US has great strength and patience, but if it is forced to defend itself or its allies, we will have no choice but to totally destroy North Korea," he said.

He described the regime as a band of criminals whose "reckless pursuit" of nuclear weapons and ballistic missiles threatened the entire world, adding it was an outrage that some countries continued to trade with Pyongyang. "Rocket man is on a suicide mission for himself and for his regime," Mr Trump said, using his own recent nickname for North Korean leader Kim Jong Un.

Denuclearisation was the only acceptable outcome, he said.

Donald Trump warns US may have to 'totally destroy' North Korea

The President's address was highly anticipated for signs of how his administration would engage with the UN after castigating it during his election campaign last year.

He pledged to stop "radical Islamic terrorism" and excoriated Iran for exporting instability and terrorism, saying the US' 2015 deal with Iran to lift sanctions in exchange for Teheran halting its nuclear weapons programme was one-sided and "an embarrassment to the United States". 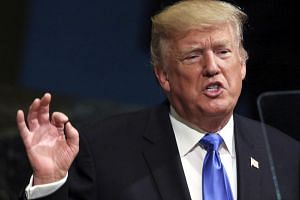 Other highlights of US President's address

"We cannot let a murderous regime continue (with) building dangerous missiles and we cannot abide by an agreement if it provides cover for the eventual construction of a nuclear programme," he said.

On Syria, Mr Trump said: "We seek the de-escalation of the Syrian conflict and a political solution that honours the will of the Syrian people. The actions of the criminal regime of Bashar al Assad... shocks the conscience of any decent person."

He also took aim at the government of Venezuelan leader Nicolas Maduro, calling it a dictatorship that had "inflicted terrible pain and suffering" and imposed a "failed ideology" on its people. He threatened unspecified US intervention.

Mentioning a strong stock market and employment at home, Mr Trump added: "We will be spending almost US$700 billion (S$943 billion) on our military and defence. Our military will soon be the strongest it has ever been."

But defining the US' America First foreign policy, he said: "We do not seek to impose our way of life on anyone but rather let it shine as an example for everyone to watch."

The US would "forever be a great friend to the world and especially to its allies," he pledged, but his primary responsibility was to Americans.

"All responsible leaders have an obligation to serve their own citizens," Mr Trump said.

The success of the UN depended upon a coalition of strong, independent nations, he said.

Professor of international politics Inderjeet Parmar at the City, University of London, said: "This was a broadly measured speech. It was strong on nationalist rhetoric, but it was business as usual on the international front. America's role in the world is very large and it will continue."

Mr Richard Ponzio, a former US State Department and UN official now with the Stimson Centre, noted Mr Trump's strong focus on conflicts. "On the whole, this was a positive development for those who feared America First meant America disengaging. And it demonstrated the utility of the UN as a forum for collective security," he told The Straits Times.