US President-elect fails to ease concerns over Russia, business interests at press conference

In his first press conference in months, Mr Donald Trump failed to lay to rest issues that are likely to dog his presidency in the foreseeable future.

The 70-year-old struck an angry note with some of the media, rejecting reports of being compromised by Russian agents as fake news and a political conspiracy. He singled out CNN and popular website BuzzFeed, and had an acrimonious exchange with a CNN reporter.

His other key message - a plan to hand over his business interests to his sons - was dismissed as "meaningless" by the current government's ethics adviser.

And a renewed pledge to build a wall on the border with Mexico and have it pay for the cost in an unspecified manner drew a swift rebuttal from Mexico's President.

The press conference at Trump Tower continued the truculent style of his campaign, and sets the tone for what is likely to be a combative presidency.

"He seems incapable for any long period of time of being a consensus builder," Professor Inderjeet Parmar of the Department of International Politics at City University of London told The Straits Times on the phone. "His first instinct is to come out fighting."

He added: "I suspect this is going to be the tone of the press conferences he decides to hold." 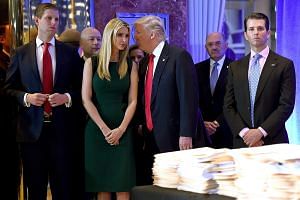 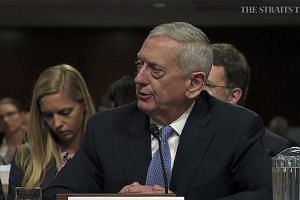 US must be ready to confront Russia, says Trump's Pentagon nominee

US intel services deny being behind Trump leaks

Mr Trump's business interests, and the apparent role of Russia in hacking the US election process - though not the actual mechanics of the election - are two issues sure to dog Mr Trump.

At the press conference, he said through his attorney Sheri Dillon that his organisation would be put in a trust managed by his sons Eric and Donald Jr, and the Trump Organisation's chief financial officer Allen Weisselberg. There would be no new foreign deals, and any domestic deals would be vetted by an ethics adviser at Trump Organisation itself.

The reaction was swift - and negative.

Said Mr Walter Shaub, director of the Office of Government Ethics, speaking at the Brookings Institution: "Stepping back from running his business is meaningless from a conflict of interest perspective. This is not a blind trust. It is not even close."

Eight Democratic senators, including Ms Elizabeth Warren, said in a joint statement: "President-elect Trump's plan to address his financial conflicts of interest boils down to this: He will continue to own his massive business interests while serving as President of the United States."

That is unacceptable, the statement added.

Mexico's President Pena Nieto said in a meeting with the country's ambassadors: "We have differences with the United States, like the wall that we are not going to pay for.

"We reject attempts to keep businesses from investing in Mexico on the basis of fear and threats."

The senator, who was defeated in last year's primaries by Mr Trump, questioned Mr Tillerson on his judgments on war crimes and human rights, especially with regard to Russia, and seemed dissatisfied with the answers. Asked later if he was going to vote against Mr Tillerson's confirmation, Mr Rubio told reporters: "I am prepared to do what is right."

A nominee needs a simple majority for approval. If 51 of the 100 senators vote in support, then the nominee is confirmed.

Earlier on Wednesday, Mr Trump's nominee for attorney-general, Mr Jeff Sessions, faced his own surprise at the Senate hearings when a fellow senator - Democrat Cory Booker - broke with a tradition of not criticising fellow senators when he urged the chamber not to confirm Mr Sessions, who is shadowed by old accusations of racism.