WASHINGTON (WASHINGTON POST) - President Donald Trump said on Wednesday (Aug 7) that he is open to calling on Congress to return from recess to strengthen background checks for gun buyers but that he sees "no political appetite" for banning assault rifles.

Trump's comments came as he left the White House for visits to Dayton, Ohio, and El Paso, Texas, on a trip that risks stoking divisions rather than bringing the country together after a pair of mass shootings over the weekend.

Trump arrived in Dayton on Air Force One shortly before 11 a.m. and was greeted by Ohio Governor Mike DeWine, a Republican, and other politicians from both parties. His motorcade then headed to Miami Valley hospital "to thank first responders and hospital staff, as well as meet with victims and families," the White House said.

Speaking to reporters before he left Washington, Trump also dismissed critics who have suggested that his rhetoric on race and immigration is partly to blame for a rise in hate-inspired violence such as that in El Paso.

"I think my rhetoric brings people together," Trump said, adding that he is "concerned about the rise of any group of hate."

'We can't back down': Beto O'Rourke responds to Trump

He called his critics "people who are looking for political gain."

Trump's comments about possible legislative responses to the weekend carnage continued a pattern in recent days of advocating unfocused ideas without specifics - and a pattern that would face an uncertain path in Congress.

In tweets on Monday, Trump called for "strong background checks," but did not mention the idea in formal remarks delivered from the White House three hours later. On Wednesday, he said he supports "background checks like we've never had before."

Many Democrats, including much of the presidential field, advocate reinstating the now-expired assault weapons ban that was included in the 1994 crime Bill.

"There is no political appetite for that at this moment," said Trump, who has also voiced support in recent days for "red-flag" laws, which allow police to temporarily confiscate firearms from a person deemed by a judge as posing a risk of violence. 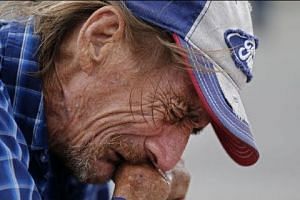 As Trump arrived in Dayton, where a shooter killed nine people on Sunday, protesters gathered in the city, with many chanting "do something" and some holding a "Baby Trump" balloon.

Trump is also expected to encounter protesters in the afternoon in El Paso, where 22 people died in Saturday's massacre.

The White House has not released other details about the trip. Before leaving the White House, Trump said he would be "meeting with first responders and law enforcement and some of the victims."

In another tweet sent just before midnight, Trump lashed out at former congressman Beto O'Rourke of Texas, a Democratic presidential candidate and native son of El Paso, a city of about 683,000 with a largely Latino population.

Trump repeated a discredited claim that O'Rourke had changed his first name to appeal to Hispanic voters, mocked his low standing in presidential polling, and told him to "respect the victims & law enforcement - & be quiet!"

O'Rourke responded on Twitter, writing: "22 people in my hometown are dead after an act of terror inspired by your racism. El Paso will not be quiet and neither will I."

The shooter in El Paso allegedly posted an essay online with language that closely mirrors Trump's rhetoric, as well as the language of the white nationalist movement, including a warning about the "Hispanic invasion of Texas."

Trump and his aides have denied any connection between his rhetoric - he frequently refers to illegal immigration as "an invasion" - and the shootings.

In another tweet on Wednesday, Trump pointed to a report from a conservative outlet about the Dayton shooter having supported liberal political figures.

"I hope other news outlets will report this as opposed to Fake News. Thank you!" he wrote.

Police have not drawn any link between the Dayton gunman's political ideology and the shootings, and his motive remains unclear.

In Trump's later remarks to reporters, he brought up the Dayton shooter again, calling him "a fan" of Senators Elizabeth Warren and Bernie Sanders, two Democratic presidential candidates.

"I don't blame Elizabeth Warren, and I don't blame Bernie Sanders in the case of Ohio," Trump said. "These are sick people, these are really people who are mentally ill, who are disturbed. It's a mental problem."

Trump also highlighted a controversy about a change in a New York Times headline on a story on Monday about his remarks on the shootings. The paper's original headline was "Trump Urges Unity Vs. Racism." It was changed in later editions to "Assailing Hate But Not Guns."

In a tweet, Trump alleged that the change came "after the Radical Left Democrats went absolutely CRAZY!" 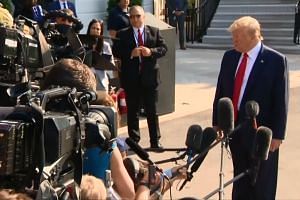 The Times has said the change was not prompted by criticism from Democratic political candidates.

O'Rourke and several current Democratic officials have urged Trump not to visit El Paso in the aftermath of Saturday's anti-immigrant attack at a Walmart Supercenter.

Democratic Representative Veronica Escobar, whose district includes the El Paso Walmart and shopping centre where the massacre occurred, said on Tuesday that she had turned down an invitation from the White House to join Trump during his trip.

"I declined the invitation to accompany the President because I refuse to be an accessory to his visit," she wrote in posts on Facebook and Twitter. "I refuse to join without a true dialogue about the pain his racist and hateful words and actions have caused our community and this country."

On Tuesday, Dayton Mayor Nan Whaley, a Democrat encouraged people unhappy about Trump's visit to the city of about 140,000 to protest.

Whaley said she isn't sure whether Trump's visit will be helpful.

"Look, I have no sense of what's in President Trump's mind at all, right?" she said.

"I can only hope that as president of the United States, he's coming here because he wants to add value to our community, and he recognises that that's what our community needs."