WASHINGTON (BLOOMBERG) - President Donald Trump said the US may find out within days whether Canada will be part of a new continent-wide trade pact, as Canada's foreign minister said ongoing negotiations in Washington remained "constructive."

"We'll let you know about Canada. A lot of people are saying, 'how are you doing with Canada?' We'll let you know. We should know over the next two or three days, maybe even today. But you will be the first to know," the president told reporters on Wednesday (Sept 5).

He also said the new name of the North American Free Trade Agreement will be a surprise.

The US has said Canada can still join a preliminary pact it struck with Mexico to replace Nafta, before the agreement is signed in late-November.

Officials held discussions this week over "a number of issues" and now the negotiating teams will meet individually and "come back with fresh ideas later this afternoon," Freeland told reporters outside Lighthizer's offices in Washington.

Trump is threatening to exclude Canada from a new Nafta and proceed with Mexico only, despite pushback from members of Congress and powerful business groups. Those constituents have also expressed concern that Trump will intensify a trade war with Beijing this week by announcing tariffs on US$200 billion (S$275 billion) of Chinese goods.

Canadian Prime Minister Justin Trudeau, speaking on Tuesday, singled out two issues as important for his country - maintaining some form of anti-dumping dispute panel and an exemption to protect cultural industries.

"We've been very clear that there are a number of things that we absolutely must see," Trudeau said. "No Nafta is better than a bad Nafta deal for Canadians."

Freeland, speaking on Wednesday, echoed Trudeau's views and added that Canada's "goal is to protect the national interest and Canadian identity."

Though the US president often threatens to withdraw from Nafta, the latest pledges are piling up pressure on negotiators who are trying to wrap up more than a year of talks and strike a deal that could be signed before Dec 1.

The White House on Friday gave Congress a required 90-day notification that it would be signing a revised version of Nafta with Mexico and would include Canada only "if it is willing."

Under congressional rules for passing trade pacts, the administration must publicly release text of the agreement 60 days before any signing, meaning wrapping up the US-Canada negotiations this month could put everything back on track.

But Trump seems unconcerned about the timeframe.

"There is no political necessity to keep Canada in the new Nafta deal," he wrote on Twitter over the weekend. "If we don't make a fair deal for the US after decades of abuse, Canada will be out. Congress should not interfere." 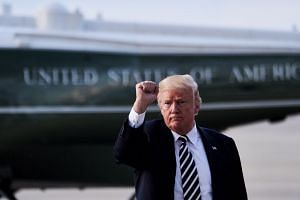 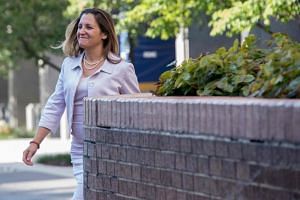 US, Canada slug it out as deadline looms to clinch Nafta 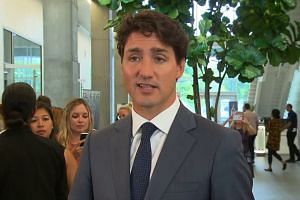 The president's comments came a day after Democrat Ron Wyden, ranking member of the Senate Finance Committee that oversees trade, criticised the administration for excluding Canada from its Nafta deal.

"You can't fix Nafta without fixing issues with Canada," Wyden said in a separate statement on Tuesday, adding that Congress has "authority over trade - the president cannot pull America out of Nafta without Congress' permission."

Sticking points in Nafta talk include America's demand for access to Canada's highly protected dairy sector, as well as the Trudeau administration's push to preserve a dispute-resolution mechanism that the White House wants to dismantle.

Canada also wants to maintain exemptions for the cultural sector, with Trudeau saying on Tuesday that the exemption "must stand" because, for instance, he wouldn't want to see Canadian television networks swallowed up.

"It would be a giving up of our sovereignty and our identity, and that is something we simply will not accept," he said of the cultural exemption.

On the dispute panels, he called it a matter of fairness.

"We need a dispute resolution mechanism," he said, adding: "We will hold firm on that."

If neither side budges, it's unclear whether Trump can withdraw from Nafta without congressional approval, though the president has said he can do so unilaterally. Under terms of the original pact, any leader can pull their nation out after giving six months' written notice.

Congress could help determine who has leverage in this week's bilateral talks. If lawmakers stay mum on the threat of excluding Canada from Nafta, Trudeau could feel pressure to make concessions. But if American lawmakers insist that Trump include his northern neighbor, US negotiators may feel the need to make a deal with Ottawa.

While Canada is clearly under pressure from Trump, "it's not clear sailing on his part either," Paul Heinbecker, a former Canadian diplomat and now a distinguished fellow at the Centre for International Governance Innovation in Waterloo, Ontario, told BNN Bloomberg Television on Tuesday.