PALM BEACH (Florida) • United States President Donald Trump's Thanksgiving began, as his days often do, with an all-caps tweet: "HAPPY THANKSGIVING TO ALL!"

Minutes later, he tweeted of potential "bedlam, chaos, injury and death", a harbinger of what would be a frenetic Thanksgiving morning.

Over the span of a few hours, the President would mix the traditional pablum of Thanksgiving tidings with renouncing the findings of his Central Intelligence Agency (CIA), threatening Mexico, criticising court decisions, attacking Mrs Hillary Clinton over her e-mails, misstating facts about the economy, floating a shutdown of the government - and per usual, jousting with the news media.

Asked what he was most thankful for on this Thanksgiving Day - a question that for commanders-in-chief usually prompts praise of service members in harm's way - Mr Trump delivered a singularly Trumpian answer. "I made a tremendous difference in our country," he said, citing himself.

He opened the public part of his day by hosting a televised conference call with military officers around the world that, while intended to spread cheer and inoculate him from criticism of his absence from war zones, quickly morphed into an effort to enlist them in his domestic priorities.

In the slathered-in-gold centre foyer of his Mar-a-Lago resort, Mr Trump sat at a small table covered in a black tablecloth, holding a script as aides scurried about. An American flag stood nearby, and a crystal chandelier dangled above. Behind him, servers arranged the tables for the upcoming Thanksgiving feast.

Beneath a gold ceiling, Mr Trump told troops representing five branches in five countries overseas about "barbed wire plus... the ultimate" that was blocking migrants at the US-Mexico border.

Loquacious and hopping from topic to topic, he debated the merits of steam catapults versus electromagnetic ones for aircraft carriers and whether the US was being treated poorly on trade. 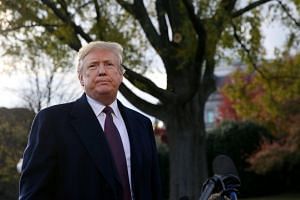 On both occasions, perplexed officers on the other end of the phone seemed to disagree with his conclusions.

He blamed "the world" for the death of journalist Jamal Khashoggi, disputing the analysis from the CIA that Saudi Arabia's Crown Prince Mohammed bin Salman was to blame. Explaining why he needed to keep a close alliance with Saudi Arabia, he cited lower oil prices.

In recent weeks, Mr Trump has stumbled when it came to demonstrating his support for the military, including skipping a military cemetery memorial service in Paris and declining to visit Arlington National Cemetery on Veterans Day.

Asked on Thursday whether it was enough to call troops from his resort and later visit officers at a nearby station, he retreated to a familiar boast. "Nobody's done more for the military than me," he said.

Mr Trump repeatedly asked military commanders what they were seeing in their regions, a conversation not usually held on a televised broadcast. He asked if those serving in Afghanistan were enjoying themselves.

As he spoke, a soccer net was being set up on the large front lawn, and his daughter Ivanka Trump, and her children, were spotted in leisurewear near the mangrove bushes. The subsequent 55-minute question-and-answer session with reporters had a similar antic air.

ON TIES WITH SAUDI ARABIA

Do people really want me to give up hundreds of thousands of jobs? And frankly, if we went by this standard, we wouldn't be able to have anybody as an ally.

MR DONALD TRUMP, doubling down on his insistence that an alliance with Saudi Arabia, sweetened by low oil prices and billions in investment, has more value than repercussions for any culpability in the killing of Washington Post opinion columnist Jamal Khashoggi.

ON PEACE TALKS IN AFGHANISTAN

I really think the people of Afghanistan… are tired of fighting. We have negotiations going on. I don't know that they are going to be successful, probably they are not. Who knows? They might be, they might not be.

If we find that it gets to a level where we are going to lose control or where people are going to start getting hurt, we will close entry into the country for a period of time until we can get it under control. I mean the whole border. Mexico will not be able to sell their cars into the United States where they make so many cars.

MR TRUMP, threatening to close the southern border if he decided that officials in Mexico had lost control of security there.

Could there be a shutdown? There certainly could, and it will be about border security, of which the wall is a part.

MR TRUMP, threatening a partial government shutdown early next month over Congress' refusal to authorise the funding that he wants for a border wall, the central promise of his 2016 presidential campaign.

It is a terrible thing when judges take over your protective services, when they tell you how to protect your border. It is a disgrace.

MR TRUMP, accusing judges of making the country unsafe as he fanned a bitter row over asylum seekers on the US-Mexico border.

A version of this article appeared in the print edition of The Straits Times on November 24, 2018, with the headline 'Trump says he's most thankful for himself on Thanksgiving'. Subscribe
Topics:
More
Whatsapp Linkedin FB Messenger Telegram Reddit WeChat Pinterest Print Copy permalink