WASHINGTON (REUTERS) - President Donald Trump said on Friday (Nov 9) he had not discussed the probe into Russia's meddling in the 2016 US presidential election with Matt Whitaker before appointing him as acting attorney-general, and it was up to Whitaker whether he wanted to be involved with the investigation.

Speaking to reporters at the White House, Trump defended his choice of Whitaker, who has been panned by critics for his past comments on the probe, saying the former US attorney had an excellent reputation and came highly recommended by former Iowa Governor Terry Branstad, who is now Trump's ambassador to China.

Trump repeatedly emphasised that he did not know Whitaker, whom he had tapped on Wednesday to lead the Justice Department on a temporary basis after forcing Attorney-General Jeff Sessions out of the job.

After Trump named Whitaker acting attorney-general, a Justice Department spokeswoman said he would oversee all matters under the department's jurisdiction, including the Russia investigation being led by Special Counsel Robert Mueller.

Mueller is probing both Russia's interference and whether Trump's presidential campaign may have colluded with Moscow.

Whitaker has publicly criticised the investigation as being too broad, and Democrats have called on him to recuse himself, saying his appointment this week appeared to be an effort by Trump to impede the investigation. 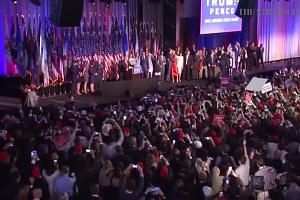 Who is acting US Attorney-General Matthew Whitaker?

"No matter who I put in, they go after him," Trump said."He's a highly respected man, especially by law enforcement, and I think he's going to do a great job."

US intelligence agencies have said Russia interfered in the election in an attempt to tip it towards Trump and away from his Democratic opponent, former Secretary of State Hillary Clinton.

Russia has denied interfering, and Trump has repeatedly said there was no collusion between his campaign and Moscow.

"I didn't speak to Matt Whitaker about it," Trump said of the Russia probe, adding he did not rule out sitting down for an interview with Mueller.

"I haven't ruled out anything," he said.

"I haven't even thought about it."