WASHINGTON (WASHINGTON POST) - US President Donald Trump suggested on Tuesday (July 30) that Baltimore is "worse than Honduras" in terms of violent crime, escalating his criticism of the district of House Oversight and Reform Committee Chairman Elijah Cummings.

Trump made the remarks in an interview with The Washington Post.

"Baltimore happens to be about the worst case," Trump said.

Conservative news sites and commentators have in recent days drawn comparisons between the situation in Baltimore and that in Honduras.

Charlie Kirk, the founder of conservative youth organization Turning Point USA, tweeted about the statistics on Monday and opined that asylum seekers from Honduras "would be more safe staying home than they would be in Democrat-controlled, American cities".

Trump's remarks about the city came hours after he lashed out once again at Cummings and the "corrupt" city he represents, telling reporters outside the White House that residents of Baltimore are "living in hell". 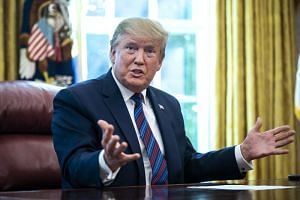 Trump rejects charges of racism after accusations of 'hate agenda'

Trump first began targeting Cummings on Saturday, tweeting that "no human being would want to live" in the "disgusting, rat and rodent infested" city.

The remarks prompted widespread accusations of racism, which Trump has denied.

Cummings's district includes part of Baltimore, as well as parts of two neighbouring counties. As chairman of the Oversight and Reform Committee, Cummings has spearheaded investigations into Trump's administration and financial dealings, and the Maryland Democrat has in recent weeks criticised the conditions of facilities for migrant children along the US-Mexico border - drawing Trump's ire in the process.

Cummings said in a tweet Tuesday afternoon that he "will continue to do every day what I am duty-bounded to do - help my constituents to live their best lives and serve as a check on the Executive Branch." Trump told The Washington Post he had met with Cummings at the White House once to discuss drug pricing.

"He was in the Oval Office one time, and I really liked him," Trump said.

The meeting took place in December 2017, and afterward, Cummings told reporters that Trump "was very aware of this prescription drug issue, almost every aspect of it," according to CNN.

But the president also renewed an attack that he had made on Monday, blaming Cummings for what he described, without evidence, as "billions" of dollars in wasted federal aid aimed at revitalising Baltimore - money that "could have built 20 brand-new cities," Trump claimed.

"And as you know, Congressman Cummings, he has been the leader, the one that tried to get a lot of this money. He is one of the reasons the money was sent there. . . . Baltimore is a mess, and I want to help the people."

Trump visited Baltimore as president-elect in December 2016, when he attended the Army-Navy game.

In Tuesday's interview, the president said he would be open to visiting the city again and addressing residents, although he did not offer specifics.

"Over the years, I've been to Baltimore many times; I know Baltimore," he said. Earlier Tuesday, he told reporters at the White House that he would visit "at the right time."