WASHINGTON (BLOOMBERG) - US President Donald Trump resisted giving Beijing advance notice of his intent to slap a new 10 per cent tariff on US$300 billion (S$412 billion) in Chinese goods in an Oval Office meeting before he announced the duties, according to several people familiar with the discussion.

During the meeting, Treasury Secretary Steven Mnuchin and US Trade Representative Robert Lighthizer briefed Mr Trump on their talks in Shanghai this week with their Chinese counterparts.

While the White House called the talks "constructive" in a statement issued Wednesday (July 31), Mr Trump concluded that the two US officials actually came away with nothing, the people said.

"When my people came home, they said 'we're talking, we have another meeting in early September,"' Mr Trump told reporters as he departed the White House on Thursday for a campaign rally. "I said 'that's fine, but in the meantime, until such time as there's a deal, we'll be taxing them.'"

Spokesmen for Treasury and the White House did not immediately respond to a request for comment.

Mr Mnuchin and Mr Lighthizer knew the president was considering a new round of tariffs before they left for Shanghai, three of the people said.

Mr Trump has been unhappy about what the US views as Chinese backtracking on trade talks, and has recently said he believes Beijing may be trying to wait until after the presidential election in 2020 to conclude a deal.

Mr Trump accused the Chinese government of reneging on a tentative trade deal in May, which prompted an impasse in talks. After a meeting with Mr Xi Jinping at the Group of 20 summit in Japan in June, Mr Trump declared that the Chinese president had agreed to increase purchases of US agricultural goods as part of a ceasefire in the trade war.

But Chinese state media said there was no such agreement, and the purchases never materialised. 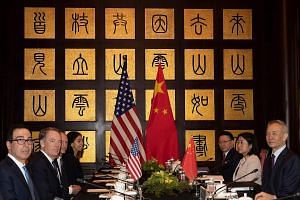 US-China trade talks: Neither side in a hurry to reach deal

Mr Trump complained again on Thursday about Chinese trade practices - "for many years, China has been taking money out by the hundreds of billions of dollars a year." "So now it's time that we change things around," he told reporters. "If they don't want to trade with us, that would be fine with me. We'd save a lot of money."

Thursday's meeting in the Oval Office was tense. Mr Mnuchin recommended that the US notify Beijing before Mr Trump announced the new tariffs, the people said.

Trump demurred, but with his permission Mr Lighthizer later attempted to place a call to Chinese Vice Premier Liu He, who is the country's lead trade negotiator. He didn't answer.

Acting Chief of Staff Mick Mulvaney talked through the market effects of increasing the China tariffs, the people said.

Mr Trump hit send on his tweets announcing the new tariffs at 1.26pm local time, while Mr Mnuchin, Mr Lighthizer, Mr Mulvaney and others were still in the Oval Office.