WASHINGTON (AFP, REUTERS) - Embattled US President Donald Trump faced explosive allegations that he divulged top secret intelligence to Russian diplomats in the Oval Office, a charge the White House scrambled to rebut on Monday (May 15).

In a shock twist, the intelligence reportedly came from a US ally who did not authorise Washington to share it with Moscow. That development could shatter trust that is essential to intelligence and counter-terrorism cooperation.

National Security Adviser HR McMaster denied the president had revealed “intelligence sources or methods” but acknowledged that Trump and Lavrov “reviewed a range of common threats to our two countries, including threats to civil aviation”.

The Post, citing unnamed officials, said that Trump went off script during the meeting, describing details about an ISIS terror threat related to the use of laptop computers on airplanes, revealing the city where the information was gathered.

The Trump administration recently barred the use of laptops in the passenger cabin from several countries in the Middle East and is mulling the expansion of that ban to cover jets originating in Europe.

“There’s nothing that the president takes more seriously than the security of the American people. The story that came out tonight as reported is false,” McMaster said without elaborating on which elements were wrong.

“Two other senior officials who were present, including the secretary of state, remember the meeting the same way and have said so. Their on-the-record accounts should outweigh those of anonymous sources. I was in the room. It didn’t happen.”

McMaster earlier refused to answer questions to a group of journalists gathered in the West Wing, saying “this is the last place I wanted to be” before leaving. 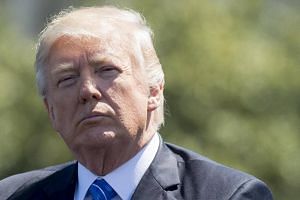 The revelations are the latest in a wave of crises to hit the White House, which late Monday was in a state of shock, with aides frantically trying to put out the fire and determine the source of such damaging leaks.

Since coming to office in January, Trump has lurched from crisis to crisis, lampooning the intelligence services, law enforcement and the media along the way.

Comey had been overseeing investigations into possible Trump campaign collusion with Russia to skew the 2016 election.

The meeting came a day after that firing, and was already controversial in itself, a red carpet welcome for top aides of Vladimir Putin just months after being hit with US sanctions for meddling in the 2016 presidential election.

Trump’s administration was left red-faced after Moscow surprised them by releasing pictures of what was meant to be a closed-door meeting.

For Trump’s already weary allies in Congress, the latest crisis brought more headaches and demanded yet more explanation from an administration that is struggling to leave its legislative mark.

“We have no way to know what was said, but protecting our nation’s secrets is paramount,” said Doug Andres, a spokesman for Republican House Speaker Paul Ryan.

“The speaker hopes for a full explanation of the facts from the administration.” Senior Republican Senator John McCain told CNN that “if it’s true, it’s obviously disturbing.” But he cautioned: “Let’s wait and see what this was all about first.”

“If the report is true, it is very disturbing. Revealing classified information at this level is extremely dangerous and puts at risk the lives of Americans and those who gather intelligence for our country,” he said.

“The president owes the intelligence community, the American people and Congress a full explanation.”

In his conversations with the Russian officials, Trump appeared to be boasting about his knowledge of the looming threats, telling them he was briefed on “great intel every day”, an official with knowledge of the exchange said, according to the Post.

One of the officials said the intelligence was classified Top Secret and also held in a secure “compartment” to which only a handful of intelligence officials have access.

After Trump disclosed the information, which one of the officials described as spontaneous, officials immediately called the CIA and the National Security Agency, both of which have agreements with a number of allied intelligence services, and informed them what had happened.

While the president has the authority to disclose even the most highly classified information at will, in this case he did so without consulting the ally that provided it, which threatens to jeopardise what they called a longstanding intelligence-sharing agreement, the US officials said.

US officials have told Reuters they have long been concerned about disclosing highly classified intelligence to Trump.

One official, who requested anonymity to discuss dealing with the president, said last month: “He has no filter; it’s in one ear and out the mouth.”

One of the officials with knowledge of Trump’s meeting with the Russian called the timing of the disclosure “particularly unfortunate”, as the president prepares for a White House meeting on Tuesday with Turkish President Tayyip Erdogan, an ally in the fight against ISIS.

Trump’s first foreign trip also begins later this week and includes a stop in Saudi Arabia, another ISIS foe, and a May 25 Nato meeting in Brussels attended by other important US allies.

After Trump disclosed the information, which one of the officials described as spontaneous, officials immediately called the CIA and the National Security Agency, both of which have agreements with a number of allied intelligence services, and informed them what had happened.

While the president has the authority to disclose even the most highly classified information at will, in this case he did so without consulting the ally that provided it, which threatens to jeopardise what they called a longstanding intelligence-sharing agreement, the US officials said.