WASHINGTON (REUTERS) - US President Donald Trump on Tuesday (March 19) accused social media platforms Facebook, YouTube and Twitter of favouring his Democratic opponents over him and his fellow Republicans.

"But fear not, we will win anyway, just like we did before! #MAGA," he said in a tweet. MAGA refers to Trump's 2016 campaign slogan, "Make America Great Again."

The president and other conservatives have repeatedly complained that these big tech platforms treat them unfairly.

Trump has previously accused Twitter of restricting the visibility of prominent US Republicans, without any providing evidence, and the avid social media user has promised to investigate the company's practices.

Trump and other conservatives say Twitter targets fellow Republicans with a practice dubbed "shadow banning," limiting the visibility of a Twitter user, including in the platform's auto-populated dropdown search box. 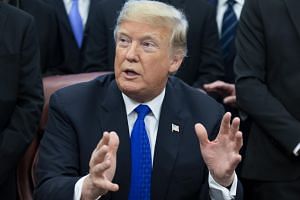 Representative Devin Nunes of California has sued Twitter over the alleged practice, according to court documents.

Twitter chief executive officer Jack Dorsey has said that algorithms have been changed to fix that issue.

The Justice Department held a meeting last fall between federal officials and state attorneys general to discuss allegations that conservative ideas are suppressed online, but so far no concrete action has been taken as a result.