WASHINGTON/MEXICO CITY (REUTERS) - US President Donald Trump increased pressure on Canada and Mexico over trade on Monday (March 5), saying the two could avoid being caught in his planned hefty tariffs on steel and aluminum imports if they ceded ground to Washington in talks on a new Nafta trade deal.

Trump also said, after a weekend of tweets in which he threatened to hit German automakers with tariffs, that Mexico needed to do more to stem the flow of illegal drugs to the United States, something not encompassed by the talks over the North American Free Trade Agreement.

Trump's determination to push ahead with a 25 per cent tariff on steel imports and a 10 per cent duty on aluminum, which he announced on Thursday (March 1), has prompted threats of retaliation from the European Union, Canada, China and Brazil among others.

His plan has roiled world stockmarkets as it raises the prospect of an ever-escalating trade war that would derail global economic growth. Trump has been criticized by a swath of senior lawmakers from his own Republican Party, but has won support from some Democratic legislators.

US House Speaker Paul Ryan on Monday urged the Trump administration not to finalise new tariffs on steel and aluminum announced last week, citing the risks to the economy.

“We are extremely worried about the consequences of a trade war and are urging the White House to not advance with this plan. The new tax reform law has boosted the economy and we certainly don’t want to jeopardise those gains,” said AshLee Strong, a spokeswoman for Ryan, the top Republican in the House.

"We have large trade deficits with Mexico and Canada. Nafta, which is under renegotiation right now, has been a bad deal for USA Massive relocation of companies & jobs. Tariffs on Steel and Aluminum will only come off if new & fair NAFTA agreement is signed," Trump tweeted on Monday.

US stocks fell for the fifth straight trading day in response to Trump's comments, although falls were small compared with previous sessions. Treasuries rallied as investors sought out safe-haven securities.

In Europe, German car giants Volkswagen AG and BMW fell around one per cent. German car companies urged policymakers on Monday to avoid a trade war with the United States "at all costs." 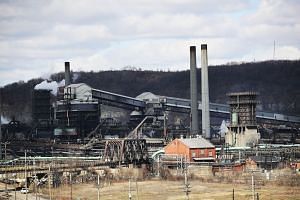 "In such a trade war there are only losers on all sides," Bernhard Mattes, president of Germany's VDA automotive industry association, said in a statement.

They were meeting in Mexico City on Monday to wrap up the latest round of discussions on revamping the 1994 Nafta deal.

A White House representative did not respond to a request for comment on Trump's statement.

Trump has touted the tariffs as a way to revive the US steel and aluminum industries. White House Director of Trade and Industrial Policy Peter Navarro repeated this point on Monday, telling Fox News, "As the president said, we can't have a country without an aluminum and steel industry."

Trump has long bucked the Republican Party's broad support for free trade, promising both on the campaign trail and in the White House that he will seek deals that better favour American workers.

That has included the threat that Washington will withdraw from Nafta if it is not satisfactorily renegotiated. He withdrew from a proposed Pacific trade pact on his first day in office.

In another comment on the Nafta talks on Monday, Trump reprised two running criticisms of Canada and Mexico. Last year, Trump came close to withdrawing from Nafta after he visited American dairy farmers in Wisconsin who say they have been hit by Canadian rules that discriminate against US milk exports.

"Also, Canada must treat our farmers much better. Highly restrictive. Mexico must do much more on stopping drugs from pouring into the US. They have not done what needs to be done. Millions of people addicted and dying," Trump tweeted.

The Mexican and Canadian ministers were likely to press Trump's trade envoy for more details on how their countries could be excluded from the blanket tariffs.

Officials have so far been evasive when asked how the three nations can continue trying to update Nafta at a time when the US president is about to take a highly protectionist measure.

Canadian Finance Minister Bill Morneau said on Monday the country was negotiating on Nafta with a partner that has"changed the terms of the discussion."