In some of his strongest language yet against the investigation he has long labelled a "witch hunt", the US president called Mueller "a conflicted prosecutor gone rogue." "He is doing TREMENDOUS damage to our Criminal Justice System," Trump charged in a series of tweets.

The attack on the special counsel came one day after Mueller halted a cooperation deal with Trump's former campaign chairman Paul Manafort, accusing him of lying to investigators.

The new allegations against Manafort came the same day George Papadopoulos, a foreign affairs advisor to Trump's 2016 campaign, was imprisoned for two weeks for lying to investigators about his Russian contacts - more than a year after pleading guilty in one of the first cases brought by the special counsel.

Both moves added to speculation that Mueller is getting closer to wrapping up his 18-month-old probe - potentially bringing charges related to collusion between Trump's campaign and a Russian effort to tilt the 2016 vote, or to an alleged attempt by Trump to obstruct the probe itself.

Last week the White House revealed that Trump had answered a long list of questions submitted by Mueller's team early this year, ending a lengthy delay that fuelled speculation that Trump could be subpoenaed to testify. 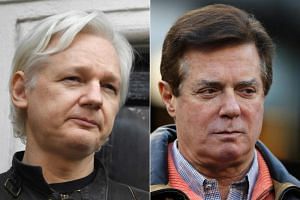 The lying claims against Manafort have reinforced the belief Mueller is drawing closer to concluding the main part of his investigation, with the White House in his sights.

On Tuesday the Guardian newspaper injected an incendiary new detail into the case, if it is true.

The Guardian said the meeting was in March 2016, the same month Manafort joined the Trump campaign, and was one of three he had with the transparency advocate between 2013 and 2016.

WikiLeaks strongly denied the report, which came as Assange and the group are facing a still-sealed US indictment that could relate to the 2016 election.

Mueller, a former FBI director, remains tight-lipped about his sprawling investigation, which has so far given rise to three dozen indictments and guilty pleas and convictions in nine cases.

Court filings indicate a focus on whether there is enough evidence in multiple contacts Trump campaign aides had with Russians to support charges of a conspiracy to disrupt the US election.

Mueller is also examining possible obstruction by Trump, a charge that could expose the president to an impeachment motion in Congress.

Celebrity lawyer Alan Dershowitz, who has frequently provided Trump with advice, said on ABC News on Sunday that Trump could take a heavy hit when Mueller eventually produces a full report on his probe.

"It's going to paint a picture that's going to be politically very devastating, Dershowitz said.

But he added that he did not believe the report would support criminal charges against the president.

It remains unclear what role Manafort could be accused of playing in alleged collusion in 2016. The longtime Republican political strategist, 69, has already been convicted for money laundering and bank fraud relating to his work before 2015 for Russia-supported Ukrainian politicians.

But various filings tie Manafort to Russians who have been charged or sanctioned relating to election meddling, including Putin-allied tycoon Oleg Deripaska and Konstantin Kilimnik, a suspected Russian intelligence operative.

Angling for a pardon?

If Manafort is shown to have ties to WikiLeaks, that could place him in consort with two other Trump allies suspected of possible coordination with the group: former campaign consultant and Manafort business partner Roger Stone, and prominent conservative conspiracy theorist Jerome Corsi.

That could jeopardise Manafort, who already faces prison time of a decade or more. But in lying to Mueller's investigators he could be taking a calculated risk, that Trump will pardon him if he remains loyal.

In August Trump lawyer Rudy Giuliani told The Washington Post that a pardon had been discussed, but not decided.

Trump himself has suggested support, saying Manafort has been mistreated. He sent out a similar signal on Tuesday, accusing Mueller and his team of treating people "horribly and viciously... ruining lives for them refusing to lie."