He cites campaign schedule, says three to four places being considered for a second summit

WASHINGTON • United States President Donald Trump said he does not expect to meet North Korean leader Kim Jong Un until after the US midterm elections next month, as the administration struggles to secure disarmament commitments from North Korea.

He said his campaign schedule prevented meetings before the Nov 6 vote, in which Republican control of Congress hangs in the balance.

Still, he said the administration had "made incredible progress" in negotiations over Pyongyang's nuclear weapon programme and was considering three to four locations for a second summit.

"I just can't leave now," Mr Trump told reporters on Tuesday aboard Air Force One, while en route to a campaign rally in Council Bluffs, Iowa. Earlier, he had said discussions about a second summit were progressing and that details "won't be too far away".

Mr Trump and Mr Kim signed a vague agreement in Singapore in June to "work towards complete denuclearisation of the Korean peninsula", but have so far struggled for a deal on the pace and sequence of steps to achieve that goal.

US Secretary of State Mike Pompeo came away from meetings on Sunday in North Korea without a date for another meeting or news on when key denuclearisation milestones might take place.

"The fact that they've had these meetings - both with Secretary of State Pompeo and with President Trump - and have held back from a clear sign that they're moving forward makes me kind of wonder," Mr Christopher Hill, a former US ambassador to South Korea and a North Korea negotiator under former US president George W. Bush, told Bloomberg Television. "I'm not seeing a lot of a time schedule. I'm just seeing, you know, sort of a vague commitment at this point."

Mr Trump said his second meeting with Mr Kim would be in "probably a different location" from Singapore. North Korean officials have suggested Pyongyang as a site, although that would hand a major propaganda victory to Mr Kim, without him having to make a concession. 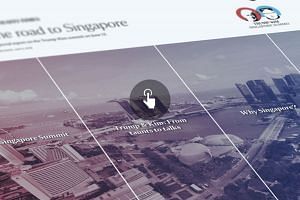 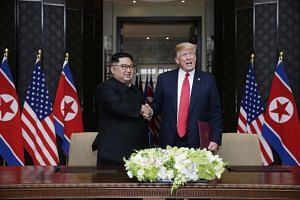 Mr Trump said that "eventually we're going to have lots of meetings on US soil and on their soil by the way. That's a two-way street".

Mr Trump emphasised the rapport he says he has developed with the North Korean leader as they negotiate over US demands that Mr Kim abandon his country's nuclear weapon and ballistic missile programmes.

Mr Pompeo told a reporter travelling with him on Monday that "we made significant progress".

"We'll continue to make significant progress, and we are further along in making that progress than any administration in an awfully long time," he said.

He cited Mr Kim's invitation to have inspectors visit the already dismantled Punggye-ri test facility, the site of all six of the regime's nuclear blasts. But when asked when inspectors might arrive, Mr Pompeo offered few specifics.

"As soon as we get it logistically worked out, Chairman Kim said he's ready" to "allow them to come in", and once the arrangements are made "we'll put them on the ground", Mr Pompeo said.

As part of his delegation to Pyongyang, Mr Pompeo brought along Mr Stephen Biegun, his special representative to North Korea and the diplomat expected to take on more of the day-to-day negotiating with Mr Kim's regime.

But Mr Biegun never got to meet his likely North Korean counterpart, Vice-Minister for Foreign Affairs Choe Son Hui. Mr Choe was out of the country - meeting officials in Russia and China - when the Americans arrived.

A version of this article appeared in the print edition of The Straits Times on October 11, 2018, with the headline 'Trump: Next Kim meeting unlikely before US elections'. Subscribe
Topics:
More
Whatsapp Linkedin FB Messenger Telegram Reddit WeChat Pinterest Print Copy permalink