NEW YORK (BLOOMBERG) - United States President-elect Donald Trump on Friday (Jan 6) jeered at the disappointing ratings for the new version of his reality show The Apprentice, despite the fact that the programme includes his own name in the credits.

Trump is listed as an executive producer on NBC's The New Celebrity Apprentice, which makes him eligible to receive proceeds from the show and would give him financial incentive to root for its success. Instead, the President-elect tweeted Friday that his replacement as host of the show, Arnold Schwarzenegger, failed to draw as many viewers as Trump used to.

"Arnold Schwarzenegger got 'swamped' (or destroyed) by comparison to the ratings machine, DJT," Trump said, using his initials. "So much for being a movie star."

The new programme's premiere drew an average audience of 4.93 million, down more than 43 per cent from the most recent Trump-hosted premiere in 2015, according to Variety, which cited tougher competition from the Rose Bowl football game and the new season of The Bachelor.

Trump has previously said he's not playing an active role on the new version of the show, although he continues to have "a big stake" in it. 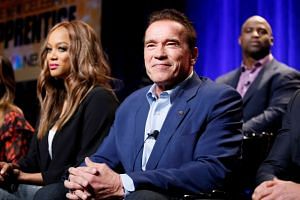 Since the President-elect's name is in the credits, he has a right to comment on the ratings, adviser Kellyanne Conway said Friday on an interview on Fox News. "This is his way of communicating," she said. "People need to get accustomed to it."

The tweets could also distract from a more serious item on the President-elect's agenda Friday. Trump is scheduled to get a briefing from the nation's senior intelligence officials on their conclusion that Russia's most senior leadership authorised hacking of Democratic organisations during the campaign. Trump has questioned that assessment.