WASHINGTON (AFP) - Donald Trump's re-election team on Thursday (Jan 2) revealed that he sits atop a staggering campaign war chest, underlining the scale of the challenge facing the US president's Democratic rivals at the start of an election year.

The sprawling Democratic field meanwhile lost another candidate when Julian Castro, the only Hispanic in the 2020 field, announced he was ending his bid.

That leaves 14 candidates still in the running to take on Trump - and competing for much-needed donations that keep a campaign's all-important ground game and advertising operations going.

In the fourth quarter of 2019, even as Trump was mired in a political scandal that resulted in his impeachment by the House of Representatives, he came out on top, raising a staggering US$46 million (S$62 million).

It was his best fundraising period in a year that brought in US$143 million for his re-election efforts, the campaign announced, easily outpacing the Democrats seeking to replace him.

And while Democrats are now effectively raising funds to compete against one another ahead of the general election in November, Trump has the luxury of stockpiling funds until his opponent is selected.

Trump's campaign now has an impressive US$102.7 million in cash on hand.

"Democrats and the media have been in a sham impeachment frenzy and the president's campaign only got bigger and stronger with our best fundraising quarter this cycle." The president faces an upcoming trial in the US Senate, where a Republican majority is expected to acquit him.

Trump himself argued that the impeachment drama, while embarrassing for his legacy, has led to a flood of donations.

He retweeted a report that describes his campaign raising a whopping US$10 million in the two days following the impeachment vote.

Trump's fundraising haul is significantly higher than that of his challengers including Bernie Sanders, the liberal senator who has so far raked in the most - US$34.5 million in 2019's final three months - of any Democratic contender. 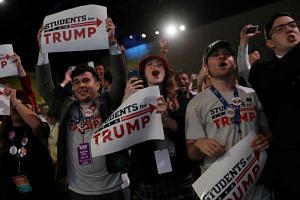 Trump enters 2020 with rock solid base

Chronicling the wrecking of the US government

The Sanders team also said it topped a notable threshold of five million individual donations, a figure not reached by his 2016 campaign until March of that year.

"Together, we're proving you don't need to beg the wealthy and the powerful for campaign contributions in order to win elections," Sanders said.

Democratic rival Pete Buttigieg also posted strong numbers, raising US$24.7 million in the fourth quarter, bringing his 2019 total to more than US$76 million.

Buttigieg - who until Wednesday served as mayor of South Bend, Indiana - has been a campaign surprise, and leads in polling in Iowa, the state which votes first in the nomination race, on February 3.

One candidate showing unexpected resilience is Andrew Yang, an Asian-American entrepreneur with no political experience who remains in contention against far more established party figures.

Yang raised US$16.5 million in the fourth quarter, capping a dramatic uptrend from early 2019 when he was a virtual unknown.

But while Biden, Sanders, Warren, Buttigieg, and Klobuchar have qualified for the next Democratic debate, on January 14, Yang has not.

Neither have Senator Cory Booker, congresswoman Tulsi Gabbard, or billionaire Michael Bloomberg, the former mayor of New York who only jumped into the race in November.

The 45-year-old Castro also failed to meet the qualifications. His exit means the Democratic field becomes whiter and older, although two women and one gay candidate, Buttigieg, will be in January's debate.

Tributes to Castro poured in from other Democrats.

"Your voice and campaign were invaluable in sticking up for underrepresented communities and pushing the field forward," said Booker, the only remaining African-American candidate in the top 10.