In the last in a series of rallies he has staged during the past three weeks - mainly in battleground states that gave him the margin of victory in the Nov 8 election - Mr Trump came back to where it began for his improbable campaign.

It was in Mobile last year where Mr Trump, a real estate magnate and reality television star with no previous political experience, drew a huge crowd that gave notice to his rivals that he was a threat for the Republican presidential nomination.

When his plane landed at the Mobile airport, it taxied beneath blasts from two water cannon trucks. Half a dozen young women wearing Old South hoop skirts in a panoply of colours were on hand to greet him.

Speaking at Ladd-Peebles Stadium, where there was a steady drizzle that he said would ruin his suit, Mr Trump relived his tense election night when he went from underdog to a victory over heavily favoured Democrat Hillary Clinton. 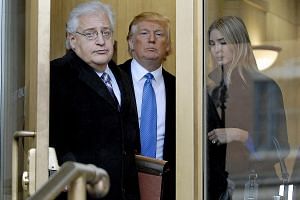 Faced with predictions that he would lose, Mr Trump said he told his wife, Melania, that he was at peace with his campaign because he had worked so hard.

"I went to my wife and I said, 'You know what, I don't feel badly about this'," Mr Trump said.

He pulled his punches when it came to First Lady Michelle Obama, who said in an interview with Oprah Winfrey, set to air on CBS tomorrow morning Singapore time: "We feel the difference now. See, now, we're feeling what not having hope feels like."

Mr Trump said: "I honestly believe she meant that statement in a different way than it came out."

A version of this article appeared in the print edition of The Straits Times on December 19, 2016, with the headline 'Trump ends 'thank you' tour in city where his campaign took off'. Subscribe
Topics:
More
Whatsapp Linkedin FB Messenger Telegram Reddit WeChat Pinterest Print Copy permalink