President Donald Trump ratcheted down his trade battles with allies on Friday when he lifted controversial levies on metal imports from Mexico and Canada and delayed imposing tariffs on Japanese and European automobiles.

In exchange for the lifting of metal tariffs, Mexico and Canada agreed to remove their tariffs on US pork, cheese and milk imports.

Mr Trump also delayed a decision for six months to impose a tariff as high as 25 per cent on cars made in Japan and the European Union.

Analysts said the moves will give relief to the many farmers who make up President Trump's base. Many have been hurting from retaliatory tariffs imposed by China and Canada.

Winding down trade friction in North America may give the President, always mindful of his base going into the 2020 election, more leeway to pursue his escalating trade war with China.

The two sides have imposed tit-for-tat tariffs on each other's goods, sending global markets into a tailspin. Washington has raised tariffs to 25 per cent on US$200 billion (S$274 billion) worth of Chinese goods, up from 10 per cent previously. China has retaliated by announcing that it would raise tariffs on US$60 billion worth of goods, with rates varying between 10 per cent and 25 per cent.

Tariff wars are not easy; tariffs hit consumers and workers and corporate interests that backed Trump in the Midwest and Deep South, where Trump's net approvals are way down.

DR INDERJEET PARMAR, professor of international politics at the City, University of London.

Last Wednesday, Mr Trump announced curbs on Chinese telecom firms like Huawei and has threatened to tax all Chinese imports. 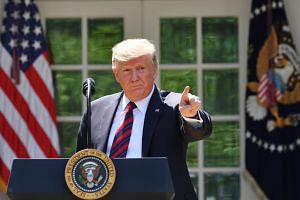 US lifts steel, aluminium tariffs on Canada and Mexico in boost for trade pact

A new trade deal - the United States-Mexico-Canada Agreement or USMCA - is up for ratification by Congress and the President is running out of time to get the USMCA approved before the 2020 presidential campaign supersedes other issues.

The New York Times reported that both Republicans and Democrats had said they would not sign off on that deal until the metal tariffs on Canada and Mexico are lifted. They argue that the levies are raising costs for American companies and consumers, and that Canadian and Mexican retaliation is hurting American farmers and businesses.

The USMCA is intended to replace the 1990s North America Free Trade Agreement that President Trump has blamed for having hollowed out America's manufacturing sector.

The Trump administration judged steel and aluminium a national security issue, hence the tariffs slapped on Mexico and Canada.

The New York Times cited a congressional aide involved in talks with Mexico and Canada as saying the White House was increasingly sensitive to pressure from Republicans in rural states where farmers have been suffering from reprisals.

"Tariff wars are not easy; tariffs hit consumers and workers and corporate interests that backed Trump in the Midwest and Deep South, where Trump's net approvals are way down," he said.

"Narrowly, that threatens Trump for 2020; more broadly, the elite will like this because they will see an opportunity to get Trump to gang up with Canada and the European Union against China."

Dr Derek Scissors, a resident scholar at the American Enterprise Institute, noted that the prospect of quotas on Japanese and European automobiles still looms. Lifting tariffs on Canada and Mexico could be seen as "embodying an expectation that China is going to be resolved fairly peacefully", he added.

"But the obvious read is the long-standing one: The main trade targets from the outset have been China and autos," he said via the Nelson Report newsletter on Asia. The administration still has both options - tariffs on autos, and more tariffs on China - open through next year.

In Canada, the move is an important political win for Prime Minister Justin Trudeau, who is struggling with controversy at home and rising tension with China.

A version of this article appeared in the print edition of The Sunday Times on May 19, 2019, with the headline 'Trump eases tariffs on allies'. Subscribe
Topics:
More
Whatsapp Linkedin FB Messenger Telegram Reddit WeChat Pinterest Print Purchase Article Copy permalink