Suggestion that US' stance is 'adversarial' will fuel nationalistic hawks in China, he warns

China is not an enemy of the United States, and giving that impression is ill-advised and risks fuelling nationalistic hawks in China, said Dr Michael Pillsbury, author of the 2015 book, The 100 Year Marathon.

Speaking at the Atlantic Council on Thursday, Dr Pillsbury pushed back against 100 former ambassadors, scholars and officials who wrote to The Washington Post on July 3, saying that the Trump administration's adversarial approach to China was "fundamentally counterproductive".

The letter said the administration was treating China like an enemy, which risked fuelling nationalism in China. Dr Pillsbury, however, argued that it was not - and that the suggestion would itself fuel nationalistic hawks in China.

"President Trump has been harshly criticised by people who think they know what his China policy is, but their assessment is not accurate," he said. "Not once has any Trump administration official used the word 'enemy'."

"On hot-button issues like Hong Kong, if the President was going to treat China in an adversarial way, he would certainly say something to endorse these demonstrations; actually, he said the opposite."

President Trump this week said Chinese President Xi Jinping had acted responsibly in the face of protests against a proposed Bill that would have allowed extradition to the Chinese mainland.

The US leader had also stuck to the US' "One China" policy on Taiwan, Dr Pillsbury added. 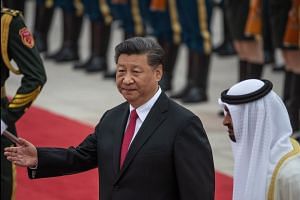 China tells US to withdraw 'black hands' from HK

He said President Trump "has not done a lot to help Taiwan the way so many conservatives wanted him to" in order to avoid angering China.

And the President had not invited the Dalai Lama - the spiritual leader in exile of the Tibetan people - to the White House.

Dr Pillsbury, 74, who speaks and reads Chinese, was a senior government official in the Ronald Reagan and George H. W. Bush administrations. He is currently a senior fellow and director for Chinese strategy at the conservative Hudson Institute.

His book, subtitled China's Secret Strategy To Replace America As The Global Superpower, is seen as one of the ideological drivers of the current administration's approach to China. He is also an informal adviser to the President.

"When people demonise President Trump's views, or if they focus on the views of Steve Bannon, who has been out of office now for almost two years, (it) gives a false perception of what President Trump is trying to do."

Former Trump chief strategist Bannon has been on lecture tours drumming up the threat of China.

Dr Pillsbury said that if Beijing perceives that America is treating it like an enemy, it would fuel nationalistic fervour and the answer would be much harsher measures from China.

"The possibility of a descent into war does exist," he acknowledged, but said limiting competition in key areas would reduce that possibility.

In fact, the US is dealing with China from a position of weakness, he contended.

There is a lot of goodwill for China in America and around the world, Dr Pillsbury said. Globally, anti-Americanism is more prevalent than anti-China sentiment.

He added that there is also no Nato-like alliance against China, unlike Cold War alliances against the Soviet Union.

At stake is the US' position as No. 1 in the world, he said. By 2049, China's economy is expected to be at least triple the size of the US'. "In those conditions, they will own us."

A version of this article appeared in the print edition of The Straits Times on July 27, 2019, with the headline 'Trump does not see China as an enemy, says adviser'. Subscribe
Topics:
More
Whatsapp Linkedin FB Messenger Telegram Reddit WeChat Pinterest Print Purchase Article Copy permalink