He took to Twitter to denounce both US intelligence agencies and a report circulating in US media with damaging claims about his personal and professional life, as he was set to hold his first news conference in nearly six months yesterday.

"Intelligence agencies should never have allowed this fake news to 'leak' into the public. One last shot at me. Are we living in Nazi Germany?" he tweeted in all capital letters yesterday.

Earlier, after a CNN report on the latest claims, Mr Trump said in a tweet that was also all in capital letters: "Fake news - a total political witch hunt!"

Russian President Vladimir Putin's spokesman Dmitry Peskov told journalists: "The Kremlin does not have compromising information on Trump." He called the dossier a "total fake" and "an obvious attempt to harm our bilateral relations". 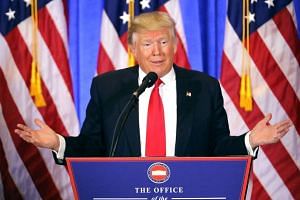 Mr Trump's denials came after intelligence chiefs last week presented him and President Barack Obama with a two-page synopsis on the potential embarrassment, according to CNN and The New York Times, citing unnamed US officials with knowledge of the meeting.

CNN gave no details of the allegations, but US media outlet Buzzfeed published, without corroborating its contents, a 35-page dossier of memos on which the synopsis is based, which had been circulating in Washington for months.

The memos describe sex videos involving prostitutes filmed during a 2013 visit by Mr Trump to a luxury Moscow hotel, supposedly as a potential means for blackmail.

They also suggest Russian officials proposed lucrative deals to gain influence over him.

A version of this article appeared in the print edition of The Straits Times on January 12, 2017, with the headline 'Trump denies claims Russia has dirt on him'. Subscribe
Topics:
More
Whatsapp Linkedin FB Messenger Telegram Reddit WeChat Pinterest Print Copy permalink