WASHINGTON • US President Donald Trump forced the cancellation of a trip to Afghanistan by his Democratic opponent Nancy Pelosi, and scrapped administration officials' travel to the Davos forum as a government shutdown plunged Washington deeper into deadlock.

The mess in the US capital already verged on the surreal as Congress feuds with the White House over how to end an impasse now in its fourth week, with thousands of federal workers left unpaid.

But now it is also getting increasingly personal between the two main antagonists.

In a letter, Mr Trump told House Speaker Pelosi: "I am sorry to inform you that your trip to Brussels, Egypt and Afghanistan has been postponed. We will reschedule this seven-day excursion when the Shutdown is over.

"I am sure you would agree that postponing this public relations event is appropriate," he wrote.

And in a move that appeared aimed at heading off Democratic criticism about non-essential administration travel during the shutdown, the White House announced the cancellation of a trip to the World Economic Forum by Treasury Secretary Steven Mnuchin and others "out of consideration for the 800,000 great American workers not receiving pay".

Mrs Pelosi and her delegation had planned a non-publicised trip to Afghanistan - an active war zone - and were due to travel on board a US Air Force plane.

In Brussels, they had planned to meet top Nato officials to affirm the United States' commitment to the alliance, a counter to Mr Trump's at-times wavering support for the defence pact.

I am sorry to inform you that your trip to Brussels, Egypt and Afghanistan has been postponed. We will reschedule this seven-day excursion when the Shutdown is over. I am sure you would agree that postponing this public relations event is appropriate.

Mrs Pelosi's office said Egypt was not on the itinerary.

According to a congressional aide, several lawmakers were already loaded onto buses preparing to leave the US Capitol on Thursday when Mr Trump pulled the plug.

The cancellation followed Mrs Pelosi's suggestion that Mr Trump postpone his Jan 29 State of the Union address to Congress, or do it from the White House instead.

Although she cited the shutdown's effect on security, she appeared to want to deny the President one of his chief annual moments in the limelight.

The White House denied that the travel blockage was payback, but few bought the argument.

House Democrats who had been slated for the trip were left fuming, including freshman congresswoman Elaine Luria, a 20-year Navy veteran who said the purpose was to express appreciation to Americans in uniform and gain critical intelligence on the ground.

"Oversight is the responsibility of Congress, and it is inappropriate for the President to interfere with our constitutional duties," Ms Luria said in a statement. 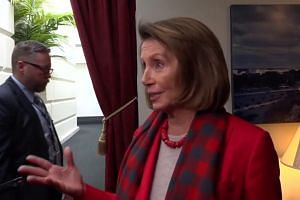 US State Department recalling its staff with pay despite government shutdown

Republican Senator Lindsey Graham, who for weeks has served as a referee of sorts between Mr Trump and Mrs Pelosi, accused the latter of "playing politics with the State of the Union".

But he also hit out at Mr Trump, saying "denying Speaker Pelosi military travel to visit our troops in Afghanistan, our allies in Egypt and Nato is also inappropriate". "One sophomoric response does not deserve another," Mr Graham said.

The government shutdown is due to Mr Trump's refusal to sign off on funding for a host of departments, in retaliation for the Democratic-led House's refusal to approve his US-Mexico border wall project.

The Democrats and the White House blame each other for the impasse, with neither side showing signs of backing down.

Trump critics pointed out that the President himself visited troops in Iraq during what he referred to as the "Trump Shutdown".

Others backed the President.