NEW YORK • US President Donald Trump has criticised Iran's leaders, calling them a "corrupt dictatorship" that is plundering from the Iranian people to pay for aggression abroad, using his speech to the United Nations General Assembly to lay down a tough message for Teheran.

"Iran's leaders sow chaos, death and destruction," Mr Trump told the annual gathering yesterday. "They do not respect their neighbours or borders or the sovereign rights of nations."

In Mr Trump's second address to the assembly, he said that while he had replaced "the spectre of conflict" with North Korea "with a bold and new push for peace", tensions with Iran have been increasing since the 2015 nuclear agreement that was signed by former president Barack Obama.

Iran's regime used proceeds from the accord to increase its military budget by 40 per cent and strengthen the repression of its people, said Mr Trump, who had pulled the United States out of the Iranian nuclear accord.

His "maximum pressure" moniker - previously describing a series of global sanctions against North Korea - has now been fitted to the administration's approach to Iran.

"We ask all nations to isolate Iran's regime as long as its aggression continues," Mr Trump said.

Yesterday, he also used his speech to call for international trade reforms and insist that his main objective as president is to protect American sovereignty.

The US leader singled out China for its trade practice "abuse" and said that members of the Organisation of Petroleum Exporting Countries (Opec) "are as usual, ripping off the rest of the world". "We defend many of these nations for nothing," he complained. 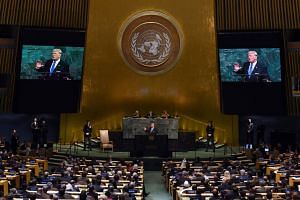 And Mr Trump also prompted some laughter from the gathering of world leaders and diplomats when he declared that he had accomplished more as president than almost any other administration in history.

"I didn't expect that reaction, but that's okay," he said.

"The United States is stronger, safer and a richer country than it was when I assumed office less than two years ago," he said.

With a message aimed mainly at Iran, Mr Trump told reporters on his way to the speech that he would not meet the Iranians until they "change their tune". Both Mr Trump and Iranian President Hassan Rouhani are attending the annual UN event.

Mr Rouhani said on Monday that Teheran would not talk to Mr Trump until the US returned to the 2015 deal.

Mr Trump's administration is pushing allies to cut imports of Iranian oil to zero as Washington prepares to restore sanctions on Iran's oil sales in November.

The remaining countries in the deal, which see it as the best chance to stop Iran from developing a nuclear bomb, on Monday agreed to keep working to maintain trade with Teheran.

German Foreign Minister Heiko Maas, following a meeting on Monday with Britain, China, France, Germany, Russia and Iran in New York, warned that the US strategy of applying maximum pressure on Teheran and going it alone could risk a regional escalation.

Earlier yesterday, UN Secretary-General Antonio Guterres, when addressing the opening session of the General Assembly, warned of growing chaos and confusion as the rules-based global order comes under threat of breaking down.