NEW YORK (AFP) - President-elect Donald Trump has vowed to move aggressively on a conservative agenda in filling Supreme Court vacancies, cracking down on immigration and cutting taxes, but also sought to reassure worried Americans they have nothing to fear from his presidency.

Setting aside the strident tone of his campaign, the 70-year-old assumed a gentler manner in his first television interview since his shock election, saying he was “saddened” by reports of harassment of Muslims and Hispanics, and telling the perpetrators: “Stop It.”

The interview with CBS’s “60 Minutes,” which was taped on Friday and aired in full on Sunday, offered Mr Trump an opportunity to reintroduce himself after an ugly, name-calling campaign and surprise victory that sparked protests in cities across the United States.

“I just don’t think they know me,” the billionaire real estate mogul said at one point, of the thousands of protesters who have massed in streets below his Trump Tower headquarters with signs that read “Not our president.”

When told that many Americans are scared of his presidency, Mr Trump said: “Don’t be afraid. We are going to bring our country back.” .

Millions were expected to tune in to Mr Trump’s interview for clues on how the billionaire will govern, and how far he intends to convert his slogans into policy.

He had earlier on Sunday named anti-establishment firebrand Steve Bannon his top strategist and senior Republican Reince Priebus his White House chief of staff, blending pragmatism with a rabble-rousing edge in the first appointments of his new administration. 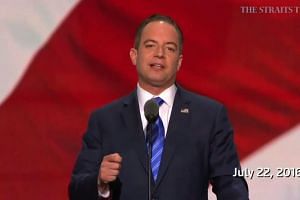 On the issues, however, Mr Trump made it clear he intends to aggressively push a right-wing agenda, pledging to name justices to the Supreme Court who are against abortion and for gun rights.

“The judges will be pro-life,” he told CBS. “In terms of the whole gun situation,” he added, “they’re going to be very pro-Second Amendment.”

He will have an immediate opportunity to fill a vacancy on the court left by the death of arch conservative justice Antonin Scalia. President Barack Obama’s attempt to fill the seat was blocked by the Republican-controlled Senate.

On immigration, Mr Trump reaffirmed his signature campaign pledge to build a wall on the border with Mexico, although he conceded parts of it may be just a fence.

And he said as many as three million undocumented immigrants with criminal records would be deported or incarcerated.

“What we are going to do is get the people that are criminal and have criminal records, gang members, drug dealers,” he said. “We have a lot of these people, probably two million, it could be even three million, we are getting them out of our country or we are going to incarcerate,” he said.

He left the door open, however, on the fate of the millions of other immigrants in the country illegally.

“After the border is secured and after everything gets normalized, we’re going to make a determination on the people that you’re talking about who are terrific people,” he said.

Immigration, he said, was one of three top legislative priorities he has discussed with House Speaker Paul Ryan, the others being action to undo Mr Obama’s signature health care reform and a bill to cut taxes and simplify the tax code.

Mr Trump had previously indicated he would keep some aspects of Obamacare, including a ban on insurance companies denying coverage for pre-existing conditions.

There were other conciliatory notes as well.

He signaled that he would not seek to overturn the legalisation of same-sex marriage in the United States.

“It’s law. It was settled in the Supreme Court. I mean it’s done,” Mr Trump said when asked if he supports marriage equality. “And I’m – I’m fine with that,” he added.

The choice of Mr Bannon and Mr Priebus as Mr Trump’s first high-level appointments suggest he intends for his new administration to preserve the populist edge that won him the White House, tempered by political pragmatism.

Mr Priebus, head of the Republican National Committee, is a seasoned political operative with close ties to Ryan, the House speaker.

But Mr Bannon, the campaign chairman in the final months of the Trump campaign, is CEO of the right-wing, conspiracy-mongering Breitbart News website known for withering attacks on the Republican elite.

It has railed against everything from women who seek abortions to Muslim immigrants, and once told females facing internet harassment to “go back to bridge tournaments, or wellness workshops, or swapping apple crumble recipes” and stop “screwing up the internet for men.”

In the “60 Minutes” interview, Mr Trump made no promises to tone down his own rhetoric as president. “I don’t want to be just a little nice monotone character,” he said.

Mr Trump was joined by his wife and adult children including Ivanka who was named to Trump’s transition team but rules out joining his administration.

“There’re a lot of things that I feel deeply, strongly about,” she said, naming wage equality, childcare and more opportunities for women. “But not in a formal administrative capacity.”