WASHINGTON (WASHINGTON POST) - A federal judge on Monday (July 30) found that United States government officials have been giving psychotropic medication to migrant children at a Texas facility without first seeking the consent of their parents or guardians, in violation of state child welfare laws.

US District Judge Dolly Gee in Los Angeles ordered the Trump administration to obtain consent or a court order before administering any psychotropic medications to migrant children, except in cases of dire emergencies.

It also ordered that the government move all children out of the Texas facility, Shiloh Residential Treatment Centre in Manvel, except for children deemed by a licensed professional to pose a "risk of harm" to themselves or others.

Staff members at Shiloh admitted to signing off on medications in lieu of a parent, relative or legal guardian, according to Ms Gee's ruling. Government officials defended this practice, saying they provided these drugs only on "an emergency basis" when a child's "extreme psychiatric symptoms" became dangerous.

The judge did not buy this explanation, pointing to testimony from children who said they were given pills "every morning and every night". Officials "could not have possibly" administered medications to children on an emergency basis every day, Ms Gee wrote.

The Shiloh Residential Treatment Centre, the judge ruled, violated a long-standing settlement that set strict standards for detaining immigrant children, including those who crossed the border unaccompanied and those who were separated from their parents.

The 1997 Flores agreement requires the government to place children in the "least restrictive" setting appropriate to their age and any special needs. 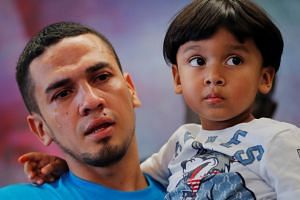 'We want the children free!' A cry from inside migrant detention centre

Plaintiffs on behalf of immigrant children argued Shiloh violated this standard because it is a locked facility with 24-hour surveillance and monitoring and engages in practices that are "not necessary for the protection of minors or others".

Shiloh is one of many shelters contracted by the US Office of Refugee Resettlement to house immigrant children.

There is evidence that several children were not allowed to have any private telephone calls at Shiloh, the judge wrote. One child, identified as Julio Z., said Shiloh staff refused to let him and other children leave their living areas to get drinking water. When Julio tried to step out to get water on one occasion, a staff member allegedly threw the boy to the ground, injuring his elbow.

The judge ordered Shiloh to stop using any unessential security measures, such as denying children drinking water. It demanded that officials allow children at Shiloh to speak privately over the phone.

Ms Gee also said the government must explain to children in writing, in a language they understand and in a reasonable amount of time, why they are being transferred to a secure facility, staff-secure facility or a residential treatment centre. The judge also ruled that officials cannot place children in a secure facility solely because they were allegedly affiliated with gangs.

Most immigrant children in US custody are in nonsecure facilities. But others are in a range of higher-security facilities. A secure facility is the most restrictive option, with a physically secure structure and staff trained to control violent behaviour - much like a juvenile detention centre.

A "staff-secure" facility may have a secure perimeter, such as a fence, and a higher staff-to-child ratio, but is not equipped with locked cells. Residential treatment centres are assigned to children who are determined to pose a danger to themselves or others.

Shiloh is a collection of trailers and small buildings that can house up to 44 children, 32 of them immigrants, according to the Centre for Investigative Reporting, which has reported extensively on the facility. It has been contracted to house immigrant children deemed unaccompanied minors since 2013, and was also set to receive children separated from their parents under the Trump administration.

The facility also has a history of troubling practices, including allegations of child abuse, according to the Centre for Investigative Reporting. A local congressman called for Shiloh to be shut down four years ago after the Houston Chronicle reported on long-running allegations of physical violence, excessive use of physical restraints and several deaths of children in custody.

A doctor at Shiloh who has signed off on many prescriptions for psychotropic drugs to immigrant children has practised without board certification to treat children and adolescents for nearly a decade, the Centre for Investigative Reporting found.

In a statement currently on its website, Shiloh said it has been visited, audited or investigated by authorities at the state and federal level in recent weeks.

"All of the widely distributed allegations about Shiloh were found to be without merit," the centre wrote.

"The children have been found to be properly cared for and treated. Shiloh Treatment Centre has a specific treatment purpose within the federal system. It does not participate in border actions."

Numerous sworn testimonies in court affidavits indicated that children at Shiloh were regularly given psychotropic medication without the proper parental consent.

Sometimes they were told these were vitamins, and recalled feeling drowsy, dizzy or particularly hungry after taking the medication. Other children recalled being held down and forcibly injected with drugs.

One child at Shiloh, identified as Isabella M, was prescribed multiple psychotropic medications at Shiloh, including topiramate, without her mother's consent.

"Nobody asked me for permission to give medications to my daughter, even though the staff at Shiloh has always had my telephone number and address," the mother said in court documents.

One 17-year-old unaccompanied minor from El Salvador, Gabriela N., said Shiloh staff gave her psychotropic medications such as Gabapentin, Prozac, and Bupropion, according to a court affidavit. She said she did not believe the medications were helping her, and did not want to take them, but felt that she had to in order to be released from detention.

Lucas R., a 12-year-old boy from Guatemala who was detained in February, was transferred to Shiloh after he refused to take antidepressant Zoloft, which was causing him stomach pain. Shiloh medical staff diagnosed Lucas with major depressive disorder and told him that officials would not release him until Shiloh medical personnel declared him psychologically sound.

His depression was in large part triggered by "being kept from family," which had entered the country before him, according to court documents.