President could shutter govt again or declare emergency to get funds, says his chief of staff

WASHINGTON • The committee of lawmakers crafting a plan for the southern United States border is expected to start meeting this week, even as a defiant President Donald Trump made clear he will not take "no" for an answer in his effort to construct a border wall.

"Does anybody really think I won't build the WALL?" Mr Trump said late on Sunday in a tweet that listed what he termed as more success in two years than any other president.

Mr Trump's acting chief of staff Mick Mulvaney said earlier that Mr Trump was prepared to shutter the government again or declare an emergency if needed to get the wall funding.

The first formal meeting of the Homeland Security Appropriations House-Senate conference committee will be held tomorrow, according to a senior Democratic aide. The committee was created last Friday after a deal was struck to end a record 35-day partial government shutdown.

While Mr Trump does not want to close the government or declare an emergency to secure the funding he wants for a border wall, he is prepared to do so if he and congressional leaders cannot strike a deal, Mr Mulvaney said on Sunday.

"He's willing to do whatever it takes to secure the border," said Mr Mulvaney on CBS' Face The Nation, one of his two appearances on Sunday talk shows.

"What he wants to do is fix this the way that things are supposed to get fixed with our government, which is through legislation." 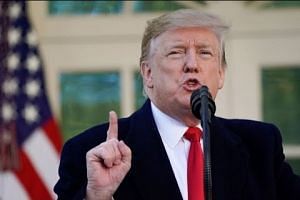 US government shutdown: Why the Trump administration caved in

He did not say whether the President would take less than the US$5.7 billion (S$7.8 billion) he has been demanding in order to ink a deal.

Mr Trump agreed last Friday to reopen the government after the partial shutdown that began on Dec 22 when he and congressional Democrats were deadlocked on the President's demands.

Mr Trump accepted a deal to continue funding for the shuttered departments - without money for a wall - until Feb 15 to allow for bipartisan negotiations on a border security plan.

He was criticised by immigration hardliners for Friday's move, and is likely to face more pushback if he comes up empty-handed again on wall funding.

Mr Mulvaney travelled to the Camp David presidential retreat in Maryland at the weekend to work on immigration and border issues, according to three people with knowledge of the matter.

But a leadership aide said on Sunday there have not been negotiations yet on border security and so far, Democratic leaders are not budging in opposing money for a wall.

House Speaker Nancy Pelosi and Senate Minority Leader Chuck Schumer said last Friday they are confident an accord can be reached.

While they continued to insist there will be no funding for a border wall, they pointed to bipartisan support for border security and the potential for funding other areas of immigration enforcement in a compromise.

House Republican leader Kevin McCarthy suggested that a deal combining money for a border wall and protecting so-called Dreamers - young, undocumented immigrants who were brought to the US as children - should be pursued.

"They're both big issues; solve them right now,'' Mr McCarthy said on Sunday on NBC.

That same day, Mr Trump tweeted about allegations of voter fraud in Texas, the cost of illegal immigration and his new slogan, "build a wall and crime will fall".

A sizeable majority of Americans also think the US is headed in the wrong direction, according to a new NBC News/Wall Street Journal poll taken before the shutdown ended.