WASHINGTON (BLOOMBERG) - US Treasury Secretary Steven Mnuchin is signalling his displeasure with President Donald Trump's trade war with China by saying nothing at all.

Mr Mnuchin, typically a vocal booster of even Mr Trump's small-bore economic achievements, is maintaining a deliberate silence to show his dissatisfaction as the President proceeds with tariffs on tens of billions of dollars in Chinese goods, said two people familiar with his thinking. He aims to resolve disputes over trade policy internally, they said.

The Treasury Secretary sought to persuade Mr Trump to take a more measured approach in negotiations. Instead, the President escalated the dispute - first slapping penalties on US$50 billion (S$68 billion) in Chinese goods last week, then threatening late on Monday (June 18) to impose tariffs on as much as US$200 billion more if the country retaliates for the first round.

Silence is Mr Mnuchin's way of balancing loyalty to the President while preserving his personal credibility with financial markets, without publicising disagreements among administration officials, the people said. They asked not to be identified describing his thinking.

Mr Mnuchin's decision cedes at least temporarily the Treasury Secretary's traditional role as chief economic spokesman for the administration to people more willing to take up the cudgels against China and other US trading partners, such as US Trade Representative Robert Lighthizer and White House trade adviser Peter Navarro.

But by avoiding an open break, Mr Mnuchin hopes to maintain influence with the President, perhaps yet giving him the opportunity to persuade him to change course, the people said.

Mr Mnuchin's voice has been largely absent as investors unload riskier assets amid signs that the trade war is deepening. The S&P 500 sank the most in three weeks after Mr Trump's announcement of further tariffs on Monday and Beijing's promise to retaliate. Stocks fell across Europe and Asia, where Chinese shares plunged after reopening following a holiday.

"Would the markets like a positive statement from the Secretary of the Treasury? Yes, if it had some substance to it and was credible," said chief economist Mickey Levy at Berenberg Capital Markets in New York. "The market looks to Mnuchin as someone who can orchestrate and get something done and find that middle path, but it is unclear how involved Mnuchin is in these negotiations with China." 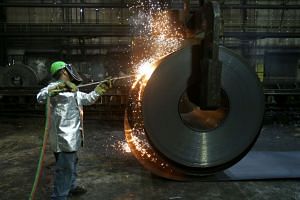 Trump threatens China with trade tariffs: A look at all his other trade wars

Mr Mnuchin is engaged in the day-to-day development of Mr Trump's policy goals in China, including work on a report on curbing Chinese investment in sensitive technologies that will be released on June 29, a Treasury Department spokesman said. He declined to comment on Mr Mnuchin's engagement with Chinese officials.

Mr Mnuchin, the national finance chairman for Mr Trump's presidential campaign, has been one of his most steadfast supporters. He regularly celebrates even modest steps towards administration economic goals such as deregulation and tax law changes.

And he has thrust himself into controversies far outside his responsibilities on behalf of Mr Trump, including a defence last August of Mr Trump's polarising remarks on race following a rally by white supremacists in Charlottesville, Virginia, that left a counter-protester dead.

The "globalist" label that opponents within the administration have fixed on Mr Mnuchin grates on the Treasury Secretary, who believes he has proven his loyalty to the President's economic agenda, said one of the people familiar with his thinking.

In May, Mr Mnuchin took the lead in tamping down tensions between the United States and China through a delegation to Beijing and negotiations in Washington with China's top economic envoy. Those meetings produced a brief truce, putting a hold on tariffs while the nations continued to talk.

The deal was immediately condemned by Mr Steve Bannon, a former adviser to the President and a China hawk, among others, who called Mr Mnuchin too soft.

Since then, what the White House describes as a trade dispute with China has escalated with threats and counter-threats, sending markets reeling.

Mr Mnuchin has kept a low profile, including during a meeting with his counterparts from other major industrialised democracies and Mr Trump's announcement last Friday that he would proceed with tariffs.

Mr Mnuchin faced outrage from counterparts over US trade policy during a Group of Seven finance ministers meeting in Canada last month. By the end, Japanese Finance Minister Taro Aso said he almost "felt sorry" for the Treasury chief of the world's biggest superpower.

Publicly at the G-7, Mr Mnuchin reiterated the US' commitment to its "most important allies", trying to cool tensions by pointing to other areas of agreement among the nations. But only a week later, Mr Trump blew apart a carefully crafted effort at unity among the G-7 over economic policies, revoking his support for the group's joint statement following its annual summit in Quebec.

Meanwhile, trade hawks inside and outside the Trump administration have portrayed Mr Mnuchin as out of sync with the President's populist base. The criticism heated up after Mr Mnuchin said on May 20 that the "trade war was on hold" after he helped negotiate a deal with the Chinese.