WASHINGTON (NYTIMES) - Secretary of State Rex Tillerson let slip last week a few tantalising details about one of the nation's most secret military contingency plans: how the United States would try to race inside North Korea to seize its nuclear weapons if it ever saw evidence that Kim Jong Un's government was collapsing.

For years, US diplomats have been trying to engage their Chinese counterparts in a discussion of this scenario, hoping to avoid a conflict between arriving US Special Forces - who have been practising this operation for years - and the Chinese military, which would almost certainly pour over the border in a parallel effort.

And for years the Chinese have resisted the conversation, according to several former US officials who tried to engage them in joint planning. The Chinese feared that if news of a conversation leaked, Beijing would be seen as conspiring with the United States over plans for an eventual North Korean collapse, eroding any leverage that Beijing still held over Kim.

So it was surprising to Tillerson's colleagues in the White House and the Pentagon when, in a talk to the Atlantic Council last week, he revealed that the Trump administration had already provided assurances to China's leadership that if US forces landed in North Korea to search for and deactivate nuclear weapons, the troops would do their work and then retreat.

North Korea has defied past predictions of collapse, and one does not appear imminent. But if a collapse were to occur, the aftermath could present grave dangers. US officials have envisioned that North Korean officers, fearing the end of Kim's government, might lob a nuclear weapon at South Korea or Japan as a last, desperate act - or detonate it on North Korean territory to make occupation impossible.

On Tuesday (Dec 12), speaking from note cards, Tillerson said at a conference on the Korea crisis that the United States and China "have had conversations about in the event that something happened - it could happen internal to North Korea; it might be nothing that we from the outside initiate - that if that unleashed some kind of instability, the most important thing to us would be securing those nuclear weapons they've already developed and ensuring that they - that nothing falls into the hands of people we would not want to have it."

He added: "We've had conversations with the Chinese about how might that be done." He repeated his past assurance that the administration was not seeking "regime collapse" or "an accelerated unification of the Korean Peninsula". 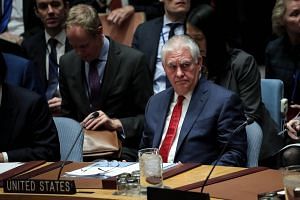 "We do not seek a reason to send our own military forces north of the Demilitarised Zone," the dividing line between North and South, he said.

But if the United States' hand is forced, he added, "we have had conversations that if something happened and we had to go across a line, we have given the Chinese assurances we would go back and retreat back to the south of the 38th parallel" when conditions allowed.

In other words, the United States would essentially cede North Korean territory to the Chinese military, or let China and South Korea figure out who would control 46,500 square miles (12,0434 square kilometres) of territory and take care of its 25 million occupants, many of whom already do not have enough to eat.

In an interview on other national security issues Friday, a senior administration official who has been deeply involved in the North Korea contingency planning declined to speak about the issue, even to confirm that the conversations the secretary described had taken place.

The White House has been more focused on the embattled Tillerson's public offer to begin talks with North Korea on any issues, even "the weather", from which he backtracked Friday in a presentation to the United Nations.

But the reference to planning for North Korean collapse, while not drawing wide notice, caught the attention of those who have been drawing up military plans for a number of possible scenarios, including US pre-emptive strikes. Asked whether Tillerson had referred by mistake to entreaties to the Chinese that previous administrations kept secret, Steven Goldstein, the new Undersecretary of State for public diplomacy and public affairs, said it was quite deliberate.

"The Secretary reiterated the position he has taken in meetings with Chinese counterparts," he said. "He would like the US and Chinese military leaders to develop a plan for the safe disposition of North Korea's nuclear weapons were the regime to collapse."

He added: "While the Secretary has never advocated for regime change, we all have an obligation to be prepared for any scenario." There is no indication that the Chinese have responded, or that military officials have met - though Beijing would almost certainly keep that secret if it occurred.

According to current and former US officials, the contingency plans to seize North Korea's nuclear arsenal have grown in complexity in recent years - largely because the North Korean arsenal has grown.

There are competing estimates among US intelligence agencies over how many weapons the North possesses. Most estimates range from 15 to 30 nuclear devices, but the Defence Intelligence Agency, which is responsible for protecting US troops on the Korean Peninsula, projected this year that the number could be in excess of 50.

The North is presumed to have undertaken an elaborate effort to hide the weapons. The result, one senior military official said recently, is that even if dozens of weapons were seized and deactivated, there would be no way to determine whether many more were still hidden away, perhaps under the control of surviving members of Kim's military.

In the secret US rehearsals of how to execute a seizure of the North's weapons - more of which are planned for the first half of next year, officials say - speed is of the essence.

Finding those weapons, landing "render safe" teams to disarm them, and airlifting them out of the country would be a difficult enough task in peacetime. But the US planning assumes a three-way scramble to seize both weapons and territory, involving Chinese troops who may find themselves facing off against the United States and its South Korean allies.

"Washington should assume that any Korean conflict involving large-scale US military operations will trigger a significant Chinese military intervention," Oriana Skylar Mastro, a professor of security studies at Georgetown University, wrote this month in the journal Foreign Affairs, in a provocative article titled "Why China Won't Rescue North Korea".

China, she wrote, "will likely attempt to seize control of key terrain, including North Korea's nuclear sites", most of which are within 60 miles or so of the Chinese border. Because of geographic advantage, they would probably arrive long before US forces.

In the past, US planning was based on an assumption that China would come to the aid of North Korea, as it did during the Korean War nearly seven decades ago. But Mastro, who also advises the US Pacific Command, wrote that today "the Chinese military assume that it would be opposing, not supporting, North Korean troops".

Her analysis mirrors what is increasingly becoming the dominant thinking among US military planners. That has made the secret discussion that Tillerson alluded to all the more vital. Curiously, some Chinese academics have begun writing about the need for the United States and China to prepare a joint strategy. Such public airing of the issue would have been banned in Chinese publications even a few years ago.

Tillerson's public comments prompted memories of a lengthy conversation between the US ambassador in South Korea and a senior South Korean official in 2010. The details were revealed by WikiLeaks in a trove of 250,000 State Department cables that included secret discussions about how to deal with China's ambitions for North Korean territory in the event of a collapse.

Over a lunchtime conversation, the South Korean diplomat confidently predicted to the US ambassador at the time, Kathleen Stephens, that North Korea would collapse "two to three years" after Kim Jong Il, the dictator at the time, died.

In fact, he died in 2011, but the predicted collapse never came. The diplomat then described plans to assure that Chinese companies would have plenty of commercial opportunities to mine minerals in the northern part of the peninsula. Stephens' description of the lunch, sent back to Washington, included the caution that "China would clearly 'not welcome' any US military presence north of the DMZ". There is no indication that those discussions included the sensitive issue of disposing of nuclear weapons. At the time, the North had only a handful.