LOS ANGELES (REUTERS) - Thousands of people are expected to march in Los Angeles on Sunday (Nov 12) to support victims of sexual assault and harassment, inspired by a social media campaign that has portrayed such abuse as a pervasive feature of American life.

The #MeToo march, which will culminate in a rally at a Hollywood Boulevard intersection, follows a relentless series of accusations by men and women who say they were victimised by high-powered figures in the entertainment industry.

Movie producer Harvey Weinstein, actor Kevin Spacey and comedian Louis C.K. are among the most prominent names to have been accused.

"The conversation around harassment in Hollywood will broaden to include other industries if we force it to! It's not going to do it on its own," organisers said on a Facebook page for the event.

The events are scheduled to include a march to CNN's headquarters in Los Angeles and a rally at the intersection of Hollywood and Highland Avenue in the heart of Hollywood. 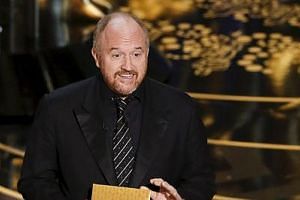 Spacey cut from film, scenes to be reshot

Weinstein hired spies to get dirt on accusers

Five women detailed sexual misconduct accusations against Emmy-winning comedian Louis C.K. in The New York Times on Thursday. He admitted to the misconduct alleged against him in a statement on Friday and apologized for his actions.

The New York Times reported in October that Weinstein, 65, had reached eight previously undisclosed settlements with women who accused him of sexual harassment and unwanted physical contact.

The New Yorker magazine reported that 13 women had claimed that Weinstein sexually harassed or assaulted them.

Weinstein has denied all of the accusations against him.

Earlier this month, Spacey apologised to actor Anthony Rapp, who had accused him of trying to seduce him in 1986 when Rapp was 14. Spacey's representatives later said he was seeking treatment.

The allegations have inspired an online campaign, tagged #MeToo, that has encouraged men and women in all walks of life to reveal their own experiences with sexual harassment and assault, often years after they occurred.