With the US elections going down to the wire, Lim Yan Liang speaks to Singapore-based observers on the contest. He asked them four questions: the key factor that might tip the election in one candidate's favour; who the better candidate is for Asia; the key strengths and weaknesses of each candidate; and who they think will win.

With the US elections going down to the wire, The Straits Times speaks to Singapore-based observers on the contest.

Both candidates do not project clarity

The one factor which could be the overriding issue in this election is uncertainty. Both candidates do not project an atmosphere of clarity, of how the country is going to go forward.

Mr Donald Trump has been able to mine into a well of dissatisfaction. What is coming home to roost is that people are dissatisfied, jobs are being lost, and people are not as happy as they were some time ago. In the case of Hillary Clinton, we see uncertainty because she suddenly says she won't support the Trans-Pacific Partnership. So this kind of flip-flopping, so to speak, doesn't bode well for either candidate.

We just have to wait and see, after all the hustle and bustle is over, whether they will adopt clear policies towards Asia.

Mr Trump's weakness is that he tends to shoot his mouth off. He can't restrain himself.

In the case of Mrs Clinton, she's known to us. But her weakness is that America is entering a period of unsettled alliances. 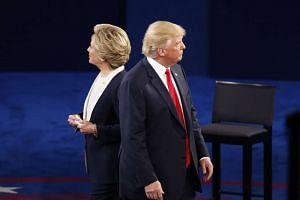 US Elections 2016: Thoughts from Singapore

We have in the Philippines Mr Rodrigo Duterte saying he wants to do away with this relationship. We have China wanting to have a more aggressive profile in the South China Sea. We have in Europe an increasingly aggressive Russian presence, portrayed by Mr Vladimir Putin. So all these are new challenges which have not been there before. The question is, is Mrs Clinton up to the mark?

The election is too close to call, because all the polls suggest it's only a margin of 5 per cent either way. So I don't want to be standing out and saying whom I prefer, and finding out it's not true.

Struggle to reassure US and the world

People dislike both candidates. And both struggle to find a message for America that is good for Americans but also reassuring to the world.

Mrs Hillary Clinton would seem the more experienced, the more Asia-focused candidate. She has been able to get from Mr Barack Obama the idea that it's a kind of third term, a continuation.

Having said that, I'm not sure whether she's got the same flexibility that Mr Obama has had in terms of reaching both the domestic audience as well as out here in Asia.

As for Mr Donald Trump, while I'm not sure anyone has really found very many good things to say about him, he can't have got this far if he is really such a poor candidate, or his politics really so crazy and so absurd. He must be speaking to an audience in America, and that, in fact, is a broader question which should alarm people looking at good ties between Asia and America.

Look at one of his rallying calls: to make America great again. He's speaking to an audience in America which has felt left out by globalisation, that others benefited more than them, especially us in Asia, that wants to deal with Asia and the rest of the world in a way that says "I dictate, you accept".

He wants to assert America, but the aggression and sometimes bald-faced remarks he makes might actually alienate the great friendships America has held in our region for many decades.

One of the most disturbing things is that some in the Republican party, the old-timers, have basically boycotted him. He really stands for a new streak in American politics which, if elected, will grow a very different American presence.

I've met enough Americans who have really felt this anger, and Mr Trump could not have come this far if he did not have a real chance.

We are in the middle of the debates, and these debates swing the undecided people. If they don't go well for Hillary, we could be facing a Trump victory. You never know with the world today.

Election a battle of the opposites

The key issue of the election will be economics. There is a sizeable reservoir of discontent in the US for the perception that inequality has widened.

The Trump campaign has obviously tapped into this, and has done so successfully.

As for Mrs Hillary Clinton, the perception remains that she is the business-as-usual candidate as far as economic policy is concerned.

The "factor" that might determine the way the election goes could well be simply whether the fence-sitters - those who do not support either Mrs Clinton or Mr Donald Trump - come out to vote, and whom they are going to vote for. According to polls, we are seeing two of the most unpopular presidential candidates contesting the same election. I won't be surprised if voter turnout shows up to be very low.

On Asia policy, the main issue is predictability. With Mrs Clinton, there will be more continuity than change. She was a chief architect of Mr Obama's Asia policy, and many in her foreign policy team are likely to be the same people who worked with her when she was secretary of state.

In the case of Mr Trump, his unpredictability makes it difficult to gauge what his policy on Asia will be. For instance, he talks very tough on China, but few would be surprised if he ends up striking deals with it as well.

Mrs Clinton has vast experience in government and politics. This, one would imagine, is a strength. But it can also be a weakness if the American people feel that the time has come for a change, for a president outside of the usual mould.

Mr Trump is the complete opposite - no experience in government and politics, ergo either a breath of much-needed fresh air or a liability.

Having said that, Mr Trump has managed to really tap into the groundswell of discontent in far more substantial and enduring ways than one would have imagined he could at the beginning of his journey.

As to who will win, your guess is as good as mine!

Both need to win over independents

The key factor that tips all US elections is turnout. Besides this, events can move numbers. Hurricane Matthew is now front and centre in the news, which means the front runner, Mrs Hillary Clinton, benefits from the pause in the campaign, as well as the coat-tail effects of Mr Barack Obama, who is enjoying high approval ratings.

Within Asia, the Chinese don't particularly like Mrs Clinton and Democrats because they push for human rights, and yet, paradoxically, have been the ones who waged wars in Korea and Vietnam. Yet they also don't like Mr Donald Trump's threat of imposing a 45 per cent tariff on Chinese imports.

The pivot to Asia sounds good to US partners and allies like Singapore, Japan and Australia - the centrepieces of the US alliance in this region - but some Chinese perceive this as a strategy of containment, and therefore prefer the isolationism of a Trump administration. Asia is big, so there is as much diversity in views between countries as within countries.

Politically, Mr Trump's weakness is his susceptibility to bait. He is an attention seeker with an incurable need to rebut everything thrown at him, and Mrs Clinton can and has used this against him. Mrs Clinton's political weakness is that she is a known Washington insider: she represents the status quo rather than change, which is what many Americans yearn for in every election. What both must do in the second debate is woo the remaining sliver of independents who are not yet decided.

Right now, Mrs Clinton has the better odds. She has a 3- to 5-point lead nationally and is ahead in most swing states like Florida, Ohio and Pennsylvania.

With a month left to move the dial, time is running out for the challenger. Early voting has started in most states, which means the polls aren't just polls any more; they reflect actual votes being cast now.

Mrs Clinton gained about four points in the first debate. If Mr Trump can do the same in the second, then the race becomes more competitive.

Impact of a Clinton presidency versus a Trump one

My short take will be that a Clinton presidency will make for more continuity, whereas Trump's likely highly transactional approach will be highly disruptive and hence unpredictable.

US Elections 2016: More stories and videos online at straitstimes.com