SUTHERLAND SPRINGS, TEXAS (REUTERS) - The man who carried out one of the deadliest US mass shootings escaped from a mental health facility in 2012, the same year he was convicted by a US Air Force court-martial of domestic abuse, according to a police report.

Devin Kelley, who massacred 26 people at a church in rural south-eastern Texas on Sunday (Nov 5), was convicted of assaulting his first wife and stepson while serving in the US Air Force in 2012, according to the Pentagon.

That same year he briefly escaped from a mental health facility in Santa Teresa, New Mexico, according to an El Paso, Texas, police report.

The person who reported Kelley's escape warned police that he could be a danger to himself and others and had been caught sneaking weapons into Holloman Air Force Base in New Mexico, where he had been stationed, according to the police report.

He had attempted to "carry out death threats that (Kelley) had made on his military chain of command", the report stated.

Police found Kelley in El Paso and turned him over to New Mexico police to return him to the facility, according to the police report. 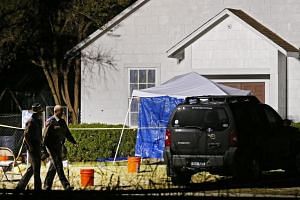 The attack at the First Baptist Church in Sutherland Springs, Texas, ranks as the fifth deadliest by a single gunman in US history.

The dead ranged in age from 18 months to 77 years and also included the unborn child of a pregnant woman who was killed. Twenty others were wounded, with 10 still in critical condition on Tuesday, officials said.

Kelley died of a self-inflicted gunshot wound in his getaway vehicle, where authorities found two handguns, said Freeman Martin, a spokesman for the state Department of Public Safety.

Kelley was also wounded by a resident of the town of about 400 people who heard the gunshot, grabbed his rifle and raced to the church, shooting the 26-year-old twice as he fled.

Kelley was involved in a domestic dispute with the parents of his second wife, whom he married in 2014, authorities said, and had sent threatening text messages to his mother-in-law before the shooting.

"We have some indication of what the conflict was between the family," Martin told a Tuesday press conference.

Although Kelley's in-laws occasionally attended services at First Baptist, they were not there on Sunday.

Kelley's cell phone has been sent to the Federal Bureau of Investigation's crime lab at Quantico, Virginia. Specialists have been unable to get into the device to see if it holds details on the cause of his attack, said Christopher Combs, the FBI's special agent in charge in San Antonio.

The Air Force said it had failed to transmit information about Kelley's conviction into the National Criminal Information Centre system, a federal database used by gun dealers to check prospective buyers for criminal backgrounds. 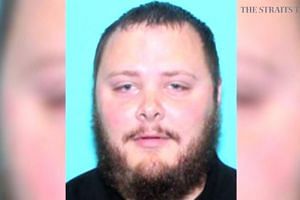 The Republican chairman of the US House Armed Services Committee called the failure to enter Kelley's record"appalling".

"The failure to properly report domestic violence convictions may be a systemic issue," Representative Mac Thornberry of Texas said in a statement.

The Air Force opened an inquiry into how it handled the former airman's criminal record, and the US Defence Department has requested a review by its inspector general to ensure other cases have been reported correctly, Pentagon officials said.

Firearms experts said the case involving Kelley, who spent a year in military detention before his bad-conduct discharge from the Air Force in 2014, has exposed a previously unnoticed weak link in the system of background checks.

It is illegal under federal law to sell a gun to someone who has been convicted of a crime involving domestic violence against a spouse or child. 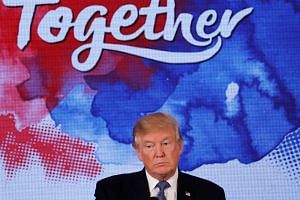 The massacre stirred an ongoing debate over gun ownership, which is protected by the Second Amendment of the US Constitution. Guns are part of the fabric of life in rural areas.

US President Donald Trump told reporters he believed stricter reviews of gun purchases would not have stopped Sunday's massacre.

"There would have been no difference," Trump said during a visit to South Korea.

He added that stricter gun laws might have prevented the man who shot Kelley from acting as he did.

"You would have had hundreds more dead."