FORT LAUDERDALE, Fla. (REUTERS) - The Iraq war veteran accused of killing five people at Fort Lauderdale airport apparently chose to travel to Florida to carry out the rampage, and there are no signs any altercation triggered the attack, authorities said on Saturday (Jan 7).

The 26-year-old suspect, Esteban Santiago, had a history of acting erratically and investigators are probing whether mental illness played a role in America's latest mass shooting.

He cooperated with investigators during an interview that lasted several hours overnight, George Piro, special agent in charge of the Federal Bureau of Investigation's office in Miami, said on Saturday.

"Indications are that he came here to carry out this horrific attack," Piro told reporters at the airport. "We have not identified any triggers that would have caused this."

Piro said terrorism has not been ruled out as a motive and that the suspect's recent travel is being reviewed. He stressed it was still very early in the investigation.

Federal charges against Santiago are due to be announced later on Saturday.

Five people were killed and six wounded in the attack, while some three dozen were taken to local hospitals with bruises or broken bones suffered in the chaos as passengers fled Friday's rampage in the crowded baggage claim area. 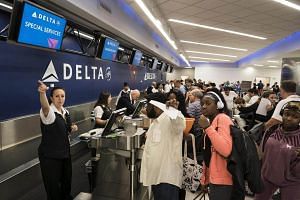 US officials not ruling out terrorism in airport shooting

5 killed in shooting at airport in Florida

Authorities say Santiago arrived in Ft. Lauderdale on a connecting flight from Alaska, and that he retrieved a 9mm semi-automatic handgun from his checked luggage before loading it in a bathroom and then shooting indiscriminately.

Witnesses said the gunman, who was wearing a blue Star Wars T-shirt, said nothing as he fired, and that he surrendered to police only after running out of ammunition.

Broward County Sheriff Scott Israel told the news conference it took the first deputy about 70 to 80 seconds to contact the suspect after the first shots rang out.

Florida Governor Rick Scott said people just trying to live their lives and enjoy the weekend had been senselessly murdered, and that some of the victims were still in surgery fighting for their lives.

Asked about official accounts that Santiago acted oddly in the past and had undergone mental health evaluations, Scott said law enforcement were working hard to figure out a motive.

"I have a brother who suffers with mental illness and it's very hard to deal with some of these issues," Scott said. "As a society, after we understand what happened, we'll have the opportunity to have a conversation."

Commercial flights at the airport resumed on Saturday at three of its four terminals. Terminal two, where the shooting took place, remained closed.

Authorities have said Santiago walked into an FBI office in Anchorage in November last year behaving erratically, and that he was turned over to local police who took him to a medical facility for a mental evaluation.

A federal law enforcement official told Reuters that Santiago told the agents in Alaska his mind was being controlled by a US intelligence agency, and that it was ordering him to watch videos made by the Islamic State of Iraq and Syria militant group.

Santiago served from 2007 to 2016 in the Puerto Rico National Guard and Alaska National Guard including a deployment to Iraq from 2010 to 2011, according to the Pentagon.

A private first class and combat engineer, he received half a dozen medals before being transferred to the inactive ready reserve in August last year.

An aunt said he came back from his deployment "a different person," MSNBC reported.

The attack was the latest in a series of U.S. mass shootings, some inspired by Islamist militants, others carried out by loners or the mentally disturbed.

Last June, Florida was the scene of the deadliest shooting rampage in modern U.S. history, when a gunman apparently inspired by Islamic State killed 49 people and wounded 53 at the gay nightclub "Pulse" in Orlando.