LOS ANGELES (AFP) - Hawaii's Kilauea volcano erupted from its summit early Thursday (May 17), shooting a huge plume of ash miles into the sky and prompting authorities to urge area residents to take cover.

The Hawaii Volcano Observatory said the explosion within one of the volcano's craters had produced a volcanic cloud reaching as high as 30,000 feet (9,000m) and was drifting northeast.

"At any time, activity may again become more explosive, increasing the intensity of ash production and producing ballistic projectiles near the vent," it said in a statement.

The observatory said residents living along the path of the ash plume should take shelter, and maintained a code red aviation alert signaled on Tuesday, meaning no air traffic was permitted in the area.

Kilauea is one of the most active volcanoes in the world and one of five on Hawaii's Big Island.

The latest burst comes two days after Kilauea sent another massive plume of volcanic ash spewing into the sky.

Scientists say the volcanic activity may be a precursor to a major eruption similar to the explosions at Kilauea in 1925.

About 2,000 people were forced to evacuate from residential areas after the volcano erupted on May 3 following a series of earthquakes.

So far, some 40 homes and other buildings have been destroyed by the red-hot lava that has been flowing from the volcano. 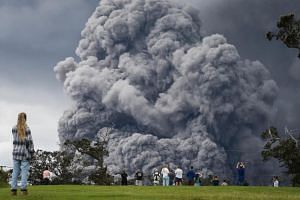