NEW YORK (BLOOMBERG) - A study of more than 250,000 women found that those who used talc or other personal-hygiene powders were not significantly more likely to develop ovarian cancer, news that will impact thousands of legal claims against drugmaker Johnson & Johnson over the products.

The US-government-sponsored study, published in the Journal of the American Medical Association (Jama) on Tuesday, is one of the biggest to date to examine whether women who used the powder products on their genitals are at increased risk of developing the deadly cancer years later.

While the study has some limitations and could not rule out the powders as a cause, the findings suggests that if a risk exists it's quite small.

"Overall, women can be very reassured by this," said Dana Gossett, chief of obstetrics and gynecology at the University of California, San Francisco, who co-authored an editorial accompanying the new research.

"The use of genital powders is unlikely to cause a significant increase in ovarian cancer risk."

Johnson & Johnson shares, which gained briefly following the release of the report, were down eight cents to US$144.02 at 11.05am in New York.

While the research won't eliminate the company's legal exposure, it may help bolster J&J's argument that the link between talc and ovarian cancer found in some previous studies is not beyond dispute.

"Another study has found there is no statistically significant association between use of talc for feminine hygiene and ovarian cancer," Kimberly Montagnino, a J&J spokeswoman, said in an emailed statement.

The lawsuits have hurt J&J shares as investors weighed the billions of dollars in potential legal risk to the New Brunswick, New Jersey-based company.

The new research pooled raw data from four epidemiology studies that followed more than 250,000 women for over a decade. Eventually, 2,168 of the women developed ovarian cancer. 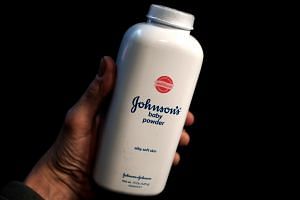 Johnson & Johnson sued over baby powder: What is talc, where is it used and why is asbestos a concern?

This small difference was not considered statistically significant, meaning that under scientific standards there's a reasonable possibility the result could have been caused by chance.

When researchers looked at women who had used genital powder for long periods of time, or more frequently - questions that were asked in some but not all the component studies - there was also no evidence of a strong ovarian cancer risk.

"We found a small positive, but not statistically significant association," said lead author Katie O'Brien, an epidemiologist at the National Institute of Environmental Health Sciences in North Carolina. "It's pretty ambiguous."

A federal judge is weighing whether the science backing up thousands of ovarian claims tied to baby powder is legitimate, a decision with broad ramifications for how the cases will proceed.

US District Judge Freda Wolfson in Trenton, New Jersey, is overseeing a consolidation of more than 12,000 baby powder cases filed in federal courts across the US.

Wolfson must decide whether experts hired by the women suing J&J used reliable methods to conclude the company's talc-based products contained asbestos, and that exposure could have caused their ovarian cancers.

According to court filings by J&J's lawyers, the idea that talc - even untainted by asbestos - can cause ovarian cancer isn't supported by science. J&J has maintained its talc-based products don't cause cancer.

The company's lawyers have sought to persuade juries that women's cancers were caused by other factors including genetics and lifestyle issues. J&J has been on a roll at trial recently, winning eight defense verdicts in talc cases last year while losing five.

Scientists and lawyers on both sides have pointed at multiple different potential causes of women's cancers. Some studies have suggested that the use of the powder products on the genitals can cause malignancies, while others have pointed to accidental inhalation of the powder as a cause of the cancer mesothelioma.

One limitation of some previous studies that had found a link between talc and ovarian cancer is that women were asked about what products they used only after they became sick. That raised the possibility that patients were more likely to remember using genital powder than healthy women in the control groups, what's known as recall bias.

The Jama research eliminates that problem by following cohorts of women over a period of years, asking them before they got cancer about powder use, said Gossett.

Gossett has no financial ties to either J&J or the plaintiff lawyers suing the company.

But the new analysis has its own significant limitations. Because the four cohort studies were not originally focused on studying talc and ovarian cancer, researchers did not collect detailed information on what types or brands of powder products women used.

That makes it impossible to tell how many of the women have used non-talc products such as cornstarch-based powder, potentially muddying any talc-ovarian cancer link. Nor does the research shed light on whether any of the talc products were contaminated with asbestos, which plaintiff lawyers blame for causing ovarian cancer.

"They don't know if they used powder with talc or if they used cornstarch," said David Egilman, a clinical professor of family medicine at Brown University, and a paid expert for plaintiff lawyers suing talcum powder makers.

In addition, he said, talc use may cause ovarian cancer through inhalation through the lungs, a type of exposure that wasn't addressed by this study.

Overall, "it is not great data," conceded O'Brien, the study author. But given how hard it is to study rarer tumours like ovarian cancer, it may be the most detailed data researchers get anytime soon.

"It is the biggest study and probably will be for a very long time," she said.