They did not confront him about the classified information they had found in his luggage. And they did not ask what they most wanted to know: whether he was a spy for China.

It was a life-or-death call.

The Chinese government had been systematically picking off American spies in China, dismantling a network that had taken the CIA years to build.

A mole hunt was underway, and the former officer, Jerry Chun Shing Lee, was the prime suspect.

The FBI could have arrested him on the spot for possessing classified information. But inside a secretive government task force, investigators argued against it, former US officials recalled.

If Lee were a turncoat, arresting him on an unrelated charge would tip off the Chinese and allow them to cover their tracks. If he was not the mole - and some argued strenuously that he was not - an arrest might allow the real traitor to escape.

So the FBI allowed Lee to return to Hong Kong, court papers show, where he hastily resettled with his family.

The agents, working out of an office in Northern Virginia, gambled that by watching patiently, they might piece together how China had decimated the United States' spy network, and determine whether Lee had helped. 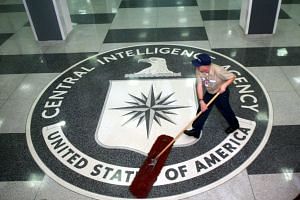 Nearly five years later, when Lee made a surprise return to the United States this week, the FBI made its move.

He stepped off a Cathay Pacific flight at Kennedy International Airport on Monday (Jan 15) and was waved through customs.

A waiting FBI agent, Kellie O'Brien, called out his name, according to court records. Lee answered, and was arrested.

His apprehension, on the same single charge that could have been brought years ago, is the latest development in one of the most damaging affairs in modern CIA history.

But it does nothing to settle the question of how or whether Lee was involved.

For years, he was the prime suspect in a mole hunt, but officials disagreed over whether he was actually to blame.

One government official said there was no plan at the moment to charge Lee with espionage, handing over US secrets to the Chinese or anything beyond the one felony count of illegally possessing classified information.

That would leave open the mystery of how China managed to unravel the CIA's web of informants.

Neither the FBI nor the Justice Department would discuss this high-stakes backstory on Wednesday (Jan 17).

"This is an example of the system working," said Ian Prior, a Justice Department spokesman. "The defendant arrived in this country, we apprehended him and he has been charged with an extremely serious offense."

In an email, Lee's college-age daughter declined to discuss the case and said that no lawyer or family member was available to speak on his behalf.

The New York Times revealed the decimation of the CIA's network last year, citing 10 current and former government officials, who were not authorised to speak publicly about the investigation.

Several of them identified Lee as the key suspect at the time.

Lee, 53, took an unremarkable path through the CIA. He became a US citizen and, after four years in the Army, studied international business management at Hawaii Pacific University. He graduated in 1992 and received a master's degree in human resource management the next year.

From there, he joined the CIA, posing as a US diplomat while serving as a clandestine case officer. From old address records, he appears to have served in Tokyo from about 1999 to 2002.

Officials say he also worked at the East Asia Division at CIA Headquarters and the agency's Beijing station before he left in 2007 and took a job in Hong Kong.

When the CIA noticed in late 2010 that its spies were disappearing, suspicion did not immediately turn to Lee, according to current and former officials. But as fears of a mole grew, the government set up a secret task force of CIA officers and FBI agents.

As the disappearances continued, analysts concluded that Lee, even though he had been out of the CIA for years, had known the identities of many of the those who had been killed or imprisoned. He showed all the indicators on a government matrix used to identify potential espionage threats, one former official recalled.

But warning signs can be wrong.

At the CIA, top officials ruefully remembered the treatment of Brian J. Kelly, an agency officer who in the 1990s was wrongly suspected by the FBI of being a Russian spy.

Another group accused CIA officials in Beijing of being sloppy and allowing themselves to be identified when meeting with their informants. It was an acrimonious dispute, and some officials conceded that a combination of factors could account for the damage.

Some former officials who reviewed the evidence described the case against Lee as strong but circumstantial, not bulletproof. Some at the CIA argued that officials were too quick to suspect a mole - especially a Chinese-American - when there were other explanations.

The FBI was watching in August 2012 when Lee returned to the United States with his family. Agents secretly entered his hotel rooms in Hawaii and Virginia and discovered two small books with handwritten notes that contained classified information, including the identities of undercover CIA officials, court papers show.

The information the books contained, including details about meetings between CIA informants and undercover agents, as well as their real names and phone numbers, matched documents that Lee had written while at the CIA, according to court documents. It was not clear whether any of the people identified in his documents were part of the Chinese round-up of CIA sources.

Agents spoke with him repeatedly in the following months. Both the attorney general at the time, Eric H. Holder Jr., and Robert S. Mueller III, then the FBI director, were personally briefed on the investigation and pledged whatever resources were necessary.

But senior government officials said they cannot recall any serious push to arrest Lee at the time or to try to charge him with espionage in connection with the lost Chinese informants.

So in June 2013, the agents let Lee leave. Current and former officials have said that the CIA's losses had ended by late 2012, so there is no evidence that the decision allowed more informants to be captured or killed.

At least once in recent years, according to a government official, Lee returned to the United States without attracting the FBI's attention. It was not clear how or why he did so.

At some point the Justice Department decided that if it had the chance, it would charge Lee. Officials suspected that opportunity might come later this year when Lee's daughter graduated from college, an occasion that might draw him back to the United States.

When Lee surprised the government recently by booking a trip to New York, prosecutors hurried to file the charge that they had kept waiting for years.