WASHINGTON • Singapore and the United States will work together to promote infrastructure development and investment in Asia, under an agreement inked on Wednesday.

The memorandum of understanding signals the development of more options to finance infrastructure in Asian countries, in addition to China's Belt and Road Initiative (BRI) and a trilateral partnership between the US, Australia and Japan to mobilise investment in infrastructure projects in the region.

Asean has been working to attract more private investment to fund its massive development needs. The Asian Development Bank estimates that South-east Asian countries will need US$210 billion (S$283 billion) a year over the next decade for infrastructure.

The agreement was signed during Minister for Trade and Industry Chan Chun Sing's introductory visit to Washington.

The countries will collaborate on information sharing, deal facilitation and structuring, and capacity-building schemes in sectors of mutual interest, such as energy, natural resource management, water, waste, transportation and urban development, the Ministry of Trade and Industry (MTI) said.

Under the agreement, US companies investing in infrastructure development in the region can make better use of Singapore's developers, financiers and professional services, and understanding of regional markets, added MTI.

Singapore and the US can also cooperate in annual project discussions or sessions to gauge market interest in the city-state on topics such as power, water, transport and urban solutions.

Both sides could also discuss projects that will tap the expertise of companies, including American businesses based in Singapore, said MTI.

Singapore, which positions itself as an infrastructure hub in Asia, has been heavily involved in various infrastructure financing schemes in the region, including the BRI. 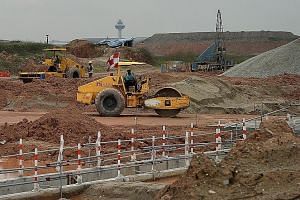 Investing more in infrastructure to protect against climate change

It signed an agreement with China last year to promote deeper collaboration between their companies in third-party markets along the Belt and Road.

In recent years, the US has criticised the BRI loans as debt traps for poor countries, touted itself as a better option for developing countries seeking infrastructure funds, and beefed up Opic by doubling its investment cap from US$30 billion to US$60 billion.