When United States presidential candidates Donald Trump and Hillary Clinton have their rematch in St Louis, Missouri, on Sunday (Oct 9) (Monday morning, Singapore time), there will be a Singapore presence as well.

Singaporean Kenneth Sng, 24, will be delivering opening remarks at the event as the Student Union president of Washington University in St Louis, which is hosting the event. His remarks are expected to be broadcast on American cable channel C-Span ahead of the clash between the two candidates.

The Public Service Commission scholarship holder told The Straits Times that he is still working on a draft of his remarks but intends to give it an international outlook.

“I’m trying to represent both the students and international students so I think it is going to take an international perspective,” said Mr Sng, who attended Jurong Junior College from 2009 to 2010.

Previous student leaders at presidential debates in the US have also been given the opportunity to meet the nominees.

The Office of International Students and Scholars at Washington University said in its official newsletter that the role of Mr Sng - who is the first international student to serve as the Student Union’s president – in the event holds special significance. 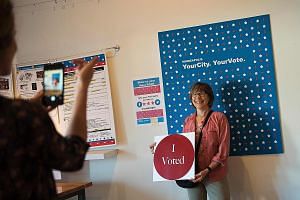 Even more so “considering how issues surrounding immigration policy have become so prominent in this election”, it said.

Mr Sng said he was shocked to learn last week that he would be speaking to the crowd at the debate.

“Past student union presidents have given remarks at debates... But I was still surprised because, after all, I am an international student and I didn’t think they would let me give remarks at a debate on their national elections,” he said.

The economics and mathematics major said that although he has given speeches before, he is particularly nervous about this one.

“It’s quite nerve-racking, to be really honest,” said Mr Sng.

“This is a very important year for the student union. It’s the first time they’ve elected an international student to be student body president in the long history of Washington University, and this year, we were selected to host the presidential debate. So, I feel a sense of responsibility and duty to students who have elected me, and the international community.”

Jurong Junior College said yesterday that it is proud of Mr Sng.

“We are extremely happy for him and very proud of him being the first international student to be elected president of Washington University’s Student Union, and being accorded this rare opportunity to deliver the opening remarks at the upcoming second US presidential debate,” it said.

According to interviews with the university’s student newspaper, Mr Sng said he ran to be president of the Student Union because he thought the university’s financial allocation process was not transparent or streamlined enough when he tried to start a Singapore students’ association.

The final-year student added that he intends to bring his approach to campus life back to the civil service when he graduates. “If I have that sense of purpose and meaning in a career in civil service, I’ll definitely continue for as long as I can.”

Over 80 million people tuned in to watch the first debate between Mr Trump and Mrs Clinton, and another large audience is expected for the rematch. The debate begins on Monday (Oct 10) at 9am Singapore time.

A version of this article appeared in the print edition of The Straits Times on October 07, 2016, with the headline 'S'pore student to make opening remarks at next US presidential debate'. Subscribe
Topics:
More
Whatsapp Linkedin FB Messenger Telegram Reddit WeChat Pinterest Print Purchase Article Copy permalink