PALM BEACH, FLORIDA (REUTERS, BLOOMBERG) - President Donald Trump received an update on ongoing trade talks with China on Saturday (Feb 16) at his Florida retreat after discussions in Beijing saw progress ahead of a March 1 deadline for reaching a deal.

Both the US and China reported progress made in negotiations last week in Beijing attended by Mr Mnuchin and Mr Lighthizer, but the White House said much work remains to be done to force changes in Chinese trade behaviour.

The two countries said they are working towards a preliminary written agreement, and will continue discussions in Washington this coming week. China’s Vice-Premier and chief trade negotiator Liu He and Mr Lighthizer are to lead the next round of talks in Washington.

Shortly after the meeting his trade team, Mr Trump said on Twitter that the talks in Beijing were “very productive".

At a White House press conference last Friday, he said the talks with China were “very complicated” and that he might extend the March 1 deadline and keep tariffs on Chinese goods from rising.

"It's going extremely well," Mr Trump said last Friday. "If we can make the deal, it would be my honour to remove" the tariffs, but otherwise many billions of dollars are pouring into Treasury, the president said at the White House.

US duties on US$200 billion (S$271 billion) worth of Chinese imports are set to rise from 10 per cent to 25 per cent if no deal is reached by March 1 to address US demands that China curb forced technology transfers and better enforce intellectual property rights.

Mr Trump also said last Friday that he would consider bringing Democrats to the negotiating table. His remark suggested he may be preparing a campaign to sell a potential trade deal with China in Washington. 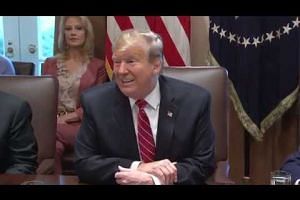 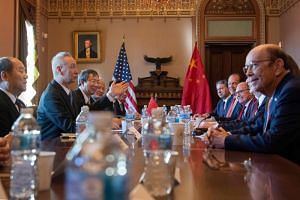 Some Democrats have pressed Mr Trump to stick to a tougher approach to Beijing.

"Any deal I make towards the end I'm going to bring Schumer - at least offer him - and Pelosi. I'm going to say please join me on the deal," Mr Trump said, referring to Senate Minority leader Chuck Schumer and House Speaker Nancy Pelosi. "I'll put them in the room and let them speak up."

US business groups welcomed the signs of progress but urged the two sides to close the gaps.

"A final, comprehensive deal is only possible if progress is made to address a range of structural reforms - including concerns over forced technology transfers - and tangible improvements in market access are clear, concrete, and enforceable," US Chamber of Commerce head of international affairs Myron Brilliant said in a statement.

Any agreement should be "detailed, enforceable, time-bound, and result in market-access improvements that have a meaningful impact" on American companies, workers and farmers, said Mr Craig Allen, president of the US-China Business Council.