Last Friday, the Trump administration increased tariffs that the President imposed last year on US$200 billion (S$273 billion) worth of Chinese imports to 25 per cent, from the previous rate of 10 per cent.

The official US$200 billion tariff list starts with "frozen retail cuts of meat of swine" and ends with "monopods, bipods, tripods and similar articles of aluminium". In between are 194 pages of products that you can find on store shelves across the country.

Economists and business owners expect the tariff increases to hit consumers in two ways. Stores that were already passing on the cost of the 10 per cent tariffs will now pass on a higher cost. And businesses large and small that previously tried to shield customers from the smaller tariffs will now find it almost impossible to avoid passing some or all of that tax on to Americans who buy their products.

Mr Trump's first two waves of tariffs, which covered US$50 billion of Chinese imports, largely shielded customers from price increases by targeting goods that businesses, not individuals, tend to buy. The US$200 billion wave still protected some hot consumer items - particularly clothing - from tariffs. After its initial proposal, administration officials modified it to exclude other necessities, like baby items.

But those tariffs spilt into stores nonetheless. A quarter of the tariffs were placed on items that researchers at the Peterson Institute for International Economics classified as consumer goods. They include US$11.3 billion in furniture imports, US$9.2 billion in auto parts and US$6.6 billion in luggage. In contrast to previous rounds of tariffs, the US trade representative has not made any of those products eligible for exclusions that would exempt them from the tariffs.

The National Retail Federation warned last week that consumers would bear the costs of an abrupt increase in the taxes on those goods.

US consumers might not have much choice but to pay more: For nearly US$100 billion of the products targeted, Panjiva estimates, China supplies more than half the imports that Americans buy.

"A sudden tariff increase with less than a week's notice would severely disrupt US businesses, especially small companies that have limited resources to mitigate the impact," said Mr David French, the federation's senior vice-president for government relations.

Among the items that might suddenly get more expensive is outdoor gear, like backpacks and the knit fabric used in fleece vests. Almost every kind of lighting fixture that most US stores sell is imported from China, and all are on the list.

More than 1,000 of the 6,000 items on the list are chemicals, many of them industrial, according to an analysis by New York-based trade data company Panjiva. 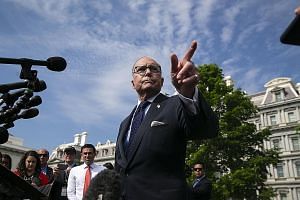 Trump claims US has upper hand in trade war with China

Almost 1,000 other products are things you eat or drink. They include vegetables such as cabbage, kale, carrots and beets, along with hundreds of types of fish.

The items most likely to sock US consumers' wallets are computers and couches. Peterson researchers estimated that the tariffs hit more than US$23 billion worth of computers and computer parts.

US consumers might not have much choice but to pay more: For nearly US$100 billion of the products targeted, Panjiva estimates, China supplies more than half the imports that Americans buy.

A version of this article appeared in the print edition of The Straits Times on May 14, 2019, with the headline 'Shoppers in US likely to pay more as tariffs kick in'. Subscribe
Topics:
More
Whatsapp Linkedin FB Messenger Telegram Reddit WeChat Pinterest Print Copy permalink