WASHINGTON (REUTERS) - Three of US President Donald Trump's senior economic aides are expected to meet this week with a top Chinese economic official to discuss trade disputes between the United States and China.

The talks are likely to cover a range of differences, including intellectual property and steel.

Mr Trump has long called for a more balanced trade relationship with China and threatened to impose a big "fine" against China to protect American intellectual property. US officials said Mr Trump has been discussing imposing a global tariff on imports of steel from China, the world's largest steel producer, and other countries.

The talks with Mr Liu may help determine the trajectory of the US-Chinese trade relationship, which Mr Trump believes is heavily tilted in favour of China.

A senior US official said there was scepticism on the US side that a trade breakthrough could be achieved any time soon.

"We're trying to treat this with an open mind. But the Chinese don't really want to make a deal. They like the status quo," the official said. 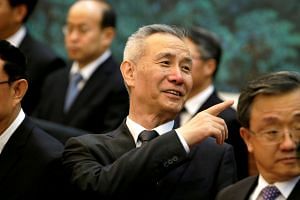 Why a trade war looms over US-China relations

There was no plan for Mr Trump himself to meet Mr Liu but officials did not rule it out if progress was being made.

Mr Liu, a Harvard-trained economist and trusted confidant of Chinese President Xi Jinping, has emerged as the front runner to be the next governor of China's central bank, according to sources with knowledge of the situation. Mr Liu is the top adviser to Mr Xi on economic policy and is also expected to become vice-premier overseeing the Chinese economy.

The Commerce Department on Feb 16 recommended that Mr Trump impose stiff curbs on steel imports from China and other countries and offered the President several options, ranging from global and country-specific tariffs to broad import quotas.

A blanket tariff on steel would cover every steel and aluminium product entering the American market from China.

China has expressed concerns over excessive protectionism in the US steel sector and urged restraint. It has also said it will oppose any "unfair and unreasonable" trade measures by countries such as the United States.