NEW YORK - Security for US President-elect Donald Trump and his family is costing New York City more than US$1 million (S$1.42 million) a day, and those costs may not drop significantly once he moves to the White House, according to city officials.

That's because his wife, Mrs Melania Trump, and their 10-year-old son Barron are expected to remain at their home at Trump Tower in Manhattan at least until the end of the school year, reported CNN. What's more, Mr Trump has also indicated that he will return home regularly, especially while his family is still there.

The cost, according to three city officials, was increased further by the need for police to protect Mr Trump's adult children and his grandchildren. They are all receiving Secret Service protection, New York Police Department deputy commissioner of intelligence and counter-terrorism John Miller told WCBS on Monday (Nov 21).

"The number one imperative here is safety and security. We owe that to the President-elect, his family and his team," said New York Mayor Bill de Blasio at a press conference on Friday (Nov 18), though he added that the city would need help with those costs.

"This is a very substantial undertaking. It will take substantial resources," he said. "We will begin the conversation with the federal government shortly on reimbursement for the NYPD for some of the costs that we are incurring." 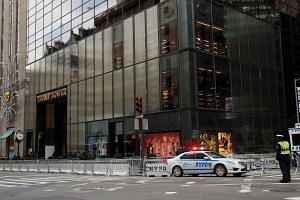 Trump Tower, once a tourist attraction, now restricted from ground to sky 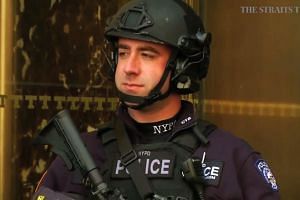 Security of the US president or President-elect is primarily the responsibility of the Secret Service, but local law enforcement is also roped in, particularly to control movements of the general public.

Every president is required to have police protection when they return home during their terms, but guarding Mr Trump in New York City is particularly costly as he lives in the most-densely populated neighbourhood of the United States' biggest city.

"We have never had a situation where a Potus (president of the United States) would be here on such a regular basis," said Mr De Blasio. "The details of his future plans are unknown, but we certainly know over these next 65 days (until the inauguration) he will be here regularly. The NYPD is up to the challenge and the city of New York is up to the challenge, I have no doubt about that."

New York City has received reimbursement for protecting world leaders in the past, such as when heads of state visit the UN, Mr De Blasio said. It received about US$500,000 a week for the 12 months ending June 30, totalling US$26 million.

However, the need to protect Mr Trump on an ongoing basis is unprecedented, said Mr De Blasio.

"This makes (previous protection efforts) look quite small obviously," he said. "We'll have to establish a new set of ground rules."

Among the security measures for Mr Trump, barricades have been set up around Trump Tower, affecting traffic, and police have closed streets when he moves through the city. When Mr Trump travelled to New Jersey on Friday (Nov 18), the Lincoln Tunnel was closed to traffic.