NEW YORK (REUTERS) - Seagram liquor heiress Clare Bronfman and three other people were arrested on Tuesday (July 24) on charges that they helped run a criminal enterprise for self-help guru Keith Raniere, who was charged with sex trafficking earlier this year, prosecutors said.

All of the defendants pleaded not guilty on Tuesday and were granted bail, though Russel and Lauren Salzman had not met their bail conditions as of late Tuesday afternoon, according to Mr John Marzulli, a spokesman for US Attorney Richard Donoghue in Brooklyn.

"We look forward to demonstrating Ms Salzman's innocence," Mr Hector Diaz, a lawyer for Lauren Salzman, said in an e-mail.

Mr David Stern, a lawyer for Nancy Salzman, declined to comment. Russel's lawyer, Mr William Fanciullo, could not immediately be reached for comment.

Raniere was accused in March of running a secret society within Nxivm, known as DOS or "the sorority", in which women were branded with his initials, blackmailed and coerced into having sex with him. 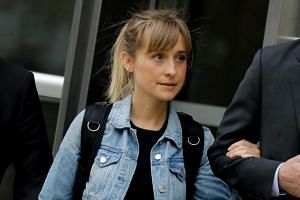 According to prosecutors, upon joining, members were required to provide so-called "collateral" that could be used against them if they tried to leave, including compromising information about family and friends, nude photographs and rights to their assets.

Raniere and Mack pleaded not guilty to the charges against them earlier this year.

Mr Marzulli said they were expected to enter pleas on Wednesday in the latest indictment.

Raniere, known within Nxivm as "Vanguard", has been in jail since his March arrest. Mack was released on bail.

"Our only concern with these baseless new charges is that the government will use them to move the trial date," Raniere's lawyer, Mr Marc Agnifilo, said on Tuesday.

"Mr Raniere is innocent and demands a prompt trial."

Mr William McGovern, a lawyer for Mack, declined to comment on Tuesday's indictment.

Bronfman and the other people arrested on Tuesday were not charged with sex trafficking.

According to the indictment they were accused of engaging in identity theft, money laundering, extortion and other illegal activities to help bring recruits and money into Nxivm.