As the list of women making sexual allegations against United States presidential hopeful Donald Trump grows, the highest-profile name yet has spoken out about an encounter with the billionaire: Salma Hayek.

The Hollywood star said that the Republican nominee tried to date her years ago, and when he was rebuffed, he planted a story in gossip tabloid the National Enquirer about her, claiming she was too short for him.

When asked by Radio Centro 93.9, a Los Angeles station, last Friday (Oct 21) whether she believed the various sexual assault allegations against Mr Trump, Hayek replied that she did, and proceeded to relate a story of her own about him.

"When I met that man, I had a boyfriend, and he tried to become his friend to get my home telephone number. He got my number and he would call me to invite me out," she said, as reported by Buzzfeed.

"When I told him I wouldn't go out with him even if I didn't have a boyfriend, (which he took as disrespectful), he called - well, he wouldn't say he called, but someone told the National Enquirer." 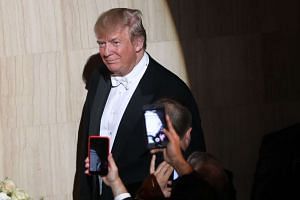 She told the Spanish-language El Show del Mandril programme that the National Enquirer said that it was Mr Trump who wouldn't go out with her, because she was "too short".

National Enquirer publisher David Pecker and Mr Trump have been reported by media outlets, including the Washington Post, to be good friends. Mr Trump has written for the magazine before, and in March, it endorsed Mr Trump for president.

That wasn't the end of the story, though. Hayek said Mr Trump called her again after the story came out.

"Later, he called and left me a message. 'Can you believe this? Who would say this? I don't want people to think this about you,'" Buzzfeed quoted her as saying.