WASHINGTON - A flurry of denials from White House officials regarding allegations that President Donald Trump revealed highly sensitive classified information about a terror threat to Russian officials has done little to dampen speculation over what transpired during the meeting held at the White House on May 10.

This has added to the already heavy Russia cloud hanging over the President.

The Washington Post report said information about an Islamic State in Iraq and Syria (ISIS) threat was shared by Mr Trump in his meeting with Russian Foreign Minister Sergei Lavrov and Moscow's Ambassador to the US Sergey Kislyak.

The Post quoted a "former senior US official close to current administration officials" saying the President "seems to be very reckless, and doesn't grasp the gravity of the things he's dealing with, especially when it comes to intelligence and national security. And it's all clouded because of this problem he has with Russia".

Soon after, the New York Times posted a similar report, saying: "President Trump boasted about highly classified intelligence in a meeting with the Russian foreign minister and ambassador last week, providing details that could expose the source of the information and the manner in which it was collected, a current and a former American government official said Monday."

Secretary of State Rex Tillerson rejected the Washington Post report, and Deputy National Security Adviser for Strategy Dina Powell, who was at the meeting, labelled it "false".

National Security Adviser H.R. McMaster later strode out to waiting media on the lawn of the White House, and reading from a statement, said: "The story that came out tonight as reported is false."

He left without answering a barrage of questions, and in the aftermath, speculation remains rife as to what transpired at the meeting.

Cornell University professor of American Studies Glenn Altschuler told The Straits Times that "the denials will for sure make the story last longer".

The reports rocked Washington just days after the President fired Federal Bureau of Investigation (FBI) director James Comey last week, ostensibly because of his bungling of investigations into the mishandling of classified e-mails by Mr Trump's erstwhile opponent Hillary Clinton. 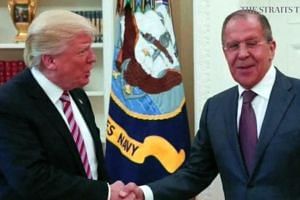 But Mr Trump himself seemed to contradict the official reason when he said in a television interview that Mr Comey was a "showboat" and mentioned the FBI's investigation into what he considered bogus claims of Russian connections with his camp.

Also last week, the Senate intelligence committee issued a subpoena to Mr Michael Flynn, Mr Trump's former National Security Adviser, for documents related to his own contacts with figures in the Russian establishment. Mr Flynn was fired by the administration for misleading Vice-President Mike Pence over the extent of those contacts.

The meeting with Mr Lavrov on May 10 in the Oval Office was also controversial because the only photographer in the room was from the state owned Russian agency Tass, and the photographs released of a smiling Mr Trump shaking hands with the Russian minister rankled the American media.

Analysts familiar with diplomatic protocol put that incident down to bungling by the White House, but it soured the mood further as the media and the political opposition sharpened focus on the allegations of Russian connections.

The President has angrily rejected the allegations, saying they have been invented by the Democratic Party and amplified by hostile media. On May 12, he tweeted: "Russia must be laughing up their sleeves watching as the US tears itself apart over a Democrat excuse for losing the election."

But the embarrassments have piled up.

"Even if unconnected, they will be connected," Professor Altschuler said. "The timing couldn't be worse. The challenge for the President, ironically, is that proving the story is untrue is going to be almost impossible."

Analysts are also speculating that some in the intelligence community who are resentful of Mr Trump, especially after his firing of Mr Comey, may be leaking information damaging to him.

The right-wing Breitbart News which had cheered Mr Trump on through his campaign last year had a similar take, headlining its report "Deep State Leaks Highly Classified Info to Washington Post to Smear President Trump". "Deep state" is a term used to describe a powerful, manipulative security and intelligence establishment.

Following the latest reports, Republican Senator Bob Corker was quoted saying: "The White House has got to do something soon to bring itself under control and in order. Obviously they're in a downward spiral right now and they've got to figure out a way to come to grips with all that's happening."

Democrat Senator Mark Warner, vice-chairman of the Senate's intelligence committee which is holding hearings on alleged Russian involvement in influencing last year's presidential election in favour of Mr Trump, tweeted: "If true, this is a slap in the face to the intel community. Risking sources & methods is inexcusable, particularly with the Russians."