Obama "should leave it to the system we all believe in," Giuliani said on Fox News.

The White House on Wednesday would not rule out issuing a pardon to protect Clinton from prosecution by the incoming administration over her use of a private e-mail server as Obama's secretary of state, an issue that dogged the Democrat's presidential campaign.

Trump during the campaign proposed appointing a special prosecutor to investigate Clinton. During one debate with Clinton, Trump said that if he were in charge of US law enforcement, Clinton "would be in jail." Chants of "lock her up!" were a staple at his rallies.

Giuliani suggested the question of pardoning Clinton is not just tied to her e-mail, but also to her family's charitable foundation, which he said is under investigation.

Giuliani said the US has two traditions that are in conflict with each other. One, he said, is that "we try to get over the anger and everything else about an election after it's over with and put it behind us." "I don't like to see America become a country in which we prosecute people, you know, about politics," he said. 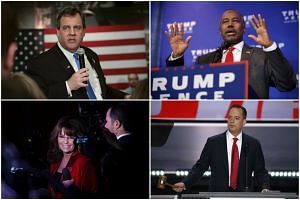 Who will be in Donald Trump's Cabinet? A look at some likely names

"On the other hand, there are deep and disturbing issues there in which if you don't investigate them - " he added, before a Fox News host jumped in: "They're going to continue."

"And also, it's hard to investigate other people," Giuliani said. "What do you say to a foundation - where you have a fraud of US$50,000 (S$70,485) - when you haven't looked at a foundation where there is an alleged fraud in the millions or hundreds of millions of dollars? Now, it may be true it's not true, but it hasn't been investigated."

"That's a very tough balance and that's why I don't think President Obama should pardon her," Giuliani said.

"I think President Obama should leave it to the system we all believe in to determine, is she innocent or is she guilty?"

Turning back to the issue of classified information that was at the centre of the FBI probe into Clinton's server, Giuliani said that if she were pardoned, David Petraeus and James Cartwright also would have to be.

The FBI's New York field office opened an inquiry into the Clinton Foundation, a step short of a formal investigation. FBI agents sought approval in February to advance the inquiry further, with tools such as subpoenas and wiretaps, but the Justice Department declined to grant the request because officials found the evidence too weak, according to a law enforcement official.

Foundation spokesmen Craig Minassian and Brian Cookstra did not immediately respond to request for comment.

FBI Director James Comey said in July that while Clinton's handling of classified information was extremely careless, it didn't warrant criminal prosecution. That decision was a central piece of Trump's argument that US politics and government were "rigged."

Clinton during the campaign said her use of private e-mail was a "mistake" but cited Comey's conclusion clearing her.

Comey sent a shockwave through the presidential race on Oct 28 by announcing a review of newly discovered e-mails that appeared pertinent to the Clinton investigation, sparking an outcry from Democrats. Two days before the election, Comey, who has seven years left in his term, affirmed his recommendation not to prosecute Clinton.

TRUMP ADMINISTRATION As Trump goes to Washington to meet with Obama on Thursday, Giuliani said that while he'd "love to be the person that comes up with the solution to cybersecurity," he'd be open to a role in the new administration.

Giuliani, 72, was mayor of New York City and ran for the Republican presidential nomination in 2008. He was the US attorney for the southern district of New York and an associate US attorney general in the 1980s.

Discussing other possible Trump appointees on Fox News, the name of former New York City Police Commissioner Raymond Kelly came up. A possible job for him?

In a subsequent interview on CNN, Giuliani ruled himself out from becoming Trump's special Clinton prosecutor. He said that Comey's status is up to the president.

"I would think that if the president wanted Jim out, Jim would leave," Giuliani said.

"I've never said I believe he was corrupted or dishonest," Giuliani added about Comey. "I said his judgment was wrong."