SAN FRANCISCO (NYTIMES) - Owning a piece of the gig economy became a reality for millions on Friday (March 29) when Lyft began trading on the public markets, signalling the start of a stream of stock offerings expected from high-profile technology companies this year.

Lyft's shares rose 8.7 per cent in its first day of trading after opening at US$87.24 (S$118.24), far above the public offering price of US$72. By the end of the day, the ride-hailing firm's market value stood at US$26.4 billion, making it one of the most valuable American companies to go public in the last decade.

At that level, it was more than 23 times the valuation of the parent company of Hertz, the rental car provider, and bigger than the parent of United Airlines.

Lyft's public market debut formalised the rise of the sharing economy, even though persistent questions remain about the effect of gig-type work on peoples' quality of life and their wages.

When ride-hailing companies like Lyft and Uber began growing this decade, they hawked their kind of work - where drivers are freelancers who drive only when they want to - as providing flexibility. But with drivers ineligible to receive employee benefits like health care, the businesses have since prompted lawsuits and labour protests.

Gig economy companies also have not proved a business fundamental: that they can make money. While Lyft and Uber have been expanding rapidly, they have lost close to or more than US$1 billion a year. And the companies are spending heavily on new initiatives like food delivery, electric bikes and self-driving vehicles, making profits a distant prospect.

Even so, Lyft's offering means that people will now own shares of the company in their mutual funds and stock portfolios, giving them more of a vested interest in the financial outcomes of gig economy firms. That will be compounded when Uber, the world's biggest ride-hailing operator, goes public in the next few months in what is expected to be the largest initial public offering of the past five years. Uber will almost certainly become part of index funds, which underlie the retirement portfolios of millions of Americans. 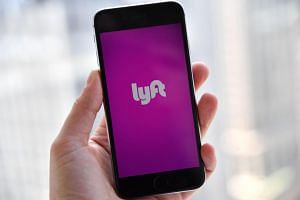 Lyft races ahead of Uber to Wall Street listing

"Their business model is completely reliant on an unsettled issue, which is the status of their drivers," Prof Veena Dubal, an employment and labour law professor at the University of California's Hastings College of the Law, said of ride-hailing companies.

"They've been trying to shift risk onto workers, and now they are shifting risk onto investors as well."

Those risks sent jitters through some investors on Friday, with Lyft's shares falling after opening up strongly. The stock dipped to roughly US$80 before declining further near the end of trading to finish the day at US$78.29.

But others turned a blind eye to the steep losses and heavy spending, which bodes well for the herd of other coming tech offerings. Apart from Uber, those set to join the IPO bonanza are Pinterest, the digital pin board; messaging company Slack; delivery company Postmates; and home-fitness company Peloton.

Interest in buying Lyft's stock was so high that demand outstripped supply within the first two days of the company's roadshow to pitch prospective investors this month. By the end, the IPO was 20 times oversubscribed, Lyft told investors on Friday.

Lyft's high listing price and performance are a "reflection of the appetite" from investors, said Mr Tom White, a senior vice president at D.A. Davidson, a wealth and asset management firm. "Right now, I think investors generally are focused on growth."

With its initial offering, Lyft leapt ahead of Uber to become the first publicly traded ride-hailing firm. Mr Logan Green and Mr John Zimmer, Lyft's founders, celebrated the event on Friday in Los Angeles, where pink confetti rained down them as they marked the occasion.

The pair had founded Zimride, a long-distance carpooling service for college students, in 2007. Zimride evolved into Lyft, which initially used the gimmick of fuzzy bubblegum-coloured mustaches to distinguish its service.

Mr Green, 35, who grew up in Santa Monica, and has cited heavy traffic in the area as an inspiration for Lyft, and Mr Zimmer, 34, used the IPO to announce a program called Lyft City Works. The programme will donate US$50 million to transportation initiatives in cities where it operates.

Mr Green said he planned to further expand Lyft into other modes of transportation, including public transit.

"We want Lyft to be the first app that you open up," he said. "The biggest investments we're making today are broadening the portfolio of products that you can access within Lyft."

The offering increased Mr Green's and Mr Zimmer's wealth, while allowing them to maintain tight control over their company. The pair hold a special class of shares that give them extra voting power, a practice common among tech founders but criticised by investor advocates.

During the nearly two-week roadshow, Lyft pitched itself to institutional investors as a mission-driven company focused on reshaping the transportation industry. It emphasised its do-gooder stance on encouraging carpooling and reducing the environmental effects of individual car ownership.

Investors' most frequent question during the roadshow was what the company would look like in five years, Mr Zimmer said.

"Investors realised that ride-sharing is the tip of the iceberg," he said.

Using independent contractors to provide services has indubitably become the keystone of a generation of tech companies, from ride-hailing apps to food delivery services like DoorDash to hair and makeup services like Glamsquad. Some researchers said contingent work could account for 43 per cent of the US workforce by next year, though the Department of Labour has reported that the number of workers in gig roles has remained mostly flat since 2005.

"I think it's quite clear that this is part of a larger trend in the economy," said Mr Sean Aggarwal, Lyft's chairman.

"That makes it an exciting story for the long-term investor. It gives them an opportunity to participate not just in this gig economy transformation but also in this larger trend of transportation as a service."

Mr White of D.A. Davidson said the goodwill towards Lyft would eventually evaporate if it ultimately could not make money.

"As we get closer to 2020, there will be an expectation that we see them narrow the losses," he said.