WASHINGTON - Trade tensions between the United States and China are dampening economic growth across the world, prompting a growing acceptance that they have to be resolved to put global growth back on track, said Finance Minister Heng Swee Keat on Monday (April 15).

The International Monetary Fund (IMF) cut its growth forecast three times in the past six months, a clear sign that greater uncertainty in the global environment was affecting investment decisions, he said in an interview after a meeting of global finance chiefs in Washington.

"That's why there is increasing recognition that we need to resolve the trade tensions quickly, even if there are other issues that will need to be resolved later," said Mr Heng, who attended last week's meetings of the G-20 and International Monetary Fund in the US capital.

IMF economists most recently downgraded their global growth forecast for 2019 from 3.5 per cent to 3.3 per cent last Tuesday (April 9), putting the world economy on track for its weakest growth since 2009.

This slowdown in growth will also affect Singapore and South-east Asia, since the global economy is so interconnected that it is impossible to isolate one part of the world from another, said Mr Heng.

Last week, Singapore posted growth figures for the first quarter of 1.3 per cent, a slowdown that Mr Heng said was partly because of the global economic environment and partly because the country is at a different stage of its growth cycle.

The Asean regional bloc, for its part, is working on better equipping its economies to deal with longer-term changes in the global economy. 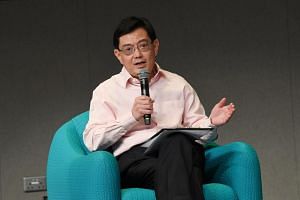 These changes include shifts in the global supply chain, technology that has rendered geographical boundaries obsolete, and advances in automation that are changing the nature of jobs.

While there is some optimism that the US and China will arrive at a deal to end their trade war, "no deal is ever done until it's done," he said.

"There is still a risk that some things may happen along the way. But the desire to do something, to conclude a deal, is there. And I hope that this will be carried through," he said.

Even if a deal was signed, the ongoing competition between the US and China would be not be resolved overnight and new developments and uncertainties would arise, said the finance minister.

"But as long as both sides take a long-term view, we hope to continue to have a stable and predictable environment for investors to continue to make good decisions for the restructuring of the global economy," he said.