WASHINGTON (REUTERS) - Republican presidential candidates roundly criticised President Barack Obama's Sunday (Dec 6) night address to the nation about the US response to the threat of terror, arguing that he lacked a vision and was not aggressive enough.

Republicans have become increasingly critical of the president's handling of the Islamic State in Iraq and Syria (ISIS), arguing that his foreign policy has failed to address the risk from the militant group.

In a rare speech from the Oval Office, Mr Obama warned Americans the terrorist threat to the United States had evolved into a dangerous "new phase" in the aftermath of a deadly California shooting rampage, but vowed to destroy the ISIS and other militant groups. 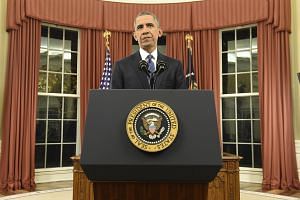 "President Obama has finally been forced to abandon the political fantasy he has perpetuated for years that the threat of terrorism was receding," former Florida Governor Jeb Bush said in a statement.

"We need to remove the self-imposed constraints President Obama has placed on our intelligence community and military, and we need to put in place an aggressive strategy to defeat ISIS and radical Islamic terrorism as I have proposed."

After the speech, Republican hopeful Donald Trump tweeted: "Is that all there is? We need a new President - FAST!"

Senator Marco Rubio of Florida criticised Mr Obama for saying that Americans should not fall into a trap of discriminating against Muslims.

"Where is there widespread evidence that we have a problem in America with discrimination against Muslims?" Mr Rubio said on Fox News after the speech. "I think not only did the president not make things better tonight, I fear he may have made things worse in the minds of many Americans."

A married couple, who might have been inspired by the ISIS, shot and killed 14 people and wounded 21 in the Southern California city of San Bernardino.

"Let me be clear: Disarming more law-abiding citizens will not stop mass murderers and terrorists," Senator Rand Paul, who is also running for president, said. "We should be advocating for more concealed-carry ability for law-abiding Americans and an end to unconstitutional gun-free zones."

"I think Democrats are going to be pleased," Mr Yepsen said. "He's not going to go far enough to quiet the critics. This was no 'day of infamy' speech."