Some US industry groups, lawmakers fear Chinese will not change trade practices

WASHINGTON • President Donald Trump's decision to delay a steep tariff hike on Chinese goods as he touts progress in weekend trade talks has been greeted with a mixture of relief and dread among US industry groups and lawmakers.

Mr Trump announced the delay on Sunday, without giving specifics, after his top trade negotiator Robert Lighthizer and Chinese Vice-Premier Liu He wrapped up seven days of "very productive talks". Tariffs on US$200 billion (S$270 billion) worth of Chinese imports had been set to rise to a prohibitive 25 per cent from the current 10 per cent if no deal was reached by Friday.

"Glad 2 hear that Pres Trump won't be increasing tariffs on China March 1 but I hope Lighthizer/ Trump won't take a half deal as a good deal," tweeted Senator Chuck Grassley, the Republican chairman of the trade and tax-focused Senate Finance Committee.

The Trump administration has been pressing China for specific commitments to protect intellectual property rights, and end cyber theft of trade secrets and practices that coerce US companies to turn over technology to Chinese firms.

But as the March 1 deadline drew closer, Mr Trump appeared increasingly eager to make a deal, saying on several occasions that he might extend the deadline. 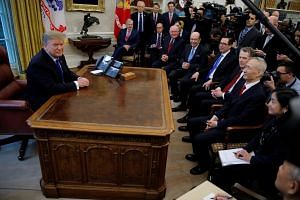 Optimism over trade deal as US delays tariff hike

"Trump has clearly put his negotiators on notice that he wants a deal," said Dr Eswar Prasad, a trade professor at Cornell University and former head of the International Monetary Fund's China department.

"This raises the chances of a deal but makes it harder for the US to pressure China into making significant concessions related to its industrial and economic strategies."

Mr Trump has issued positive but cryptic statements and tweets about the delay and the nature of progress made at the weekend, saying that a deal with Beijing is "very, very close", and talking about a "signing summit" with Chinese President Xi Jinping.

Farmers "will be treated better than they have ever been treated before!" if a deal is made, he tweeted.

While some industry groups, including the Retail Industry Leaders Association, cheered the delay for averting price increases on thousands of consumer goods, others simply called the delay "encouraging".

Democrats in Congress were more pointed, saying Mr Trump should be prepared to walk away from a bad deal.

"China's forced technology transfers and IP theft practices are unfair and must be addressed," said Representative Earl Blumenauer of Oregon, the new Democratic chairman of the House Ways and Means trade sub-committee.

Mr Lighthizer, who has been arguing for a tougher US stance on reforms to the Chinese economy for years, will update lawmakers on the progress of the talks when he testifies before the Ways and Means committee today.