New York City will drop from 57 deg F (14 deg C) to 20 deg F (minus 6 deg C) over the course of the day on Tuesday as a cold front roars through, bringing rain and possibly a few wet snowflakes, the National Weather Service said.

Manhattan could break a record low for the date on Wednesday if readings there fall below 24 deg F (minus 4 deg C).

"I could see them all falling."

Since early morning, the temperature in Manhattan's Central Park fell almost 20 degrees, and at mid-day was hovering at around 38 deg F (3 deg C).

The cold is already clutching the Midwest. Chicago received 3.6 inches (9cm) of snow, a record for Nov 11, and the temperature was just 14 deg F (minus 10 deg C) on Tuesday.

Freeze warnings cover the South from Texas to South Carolina.

In Texas, on-peak electricity at the hub that includes Dallas jumped 755 per cent to average US$146.86 a megawatt-hour as of 11.12am Eastern time, according to Genscape data. Spot natural gas in the Northeast jumped to eight-month highs, touching US$8 per million British thermal units in New England on the Intercontinental Exchange on Tuesday, said David Hoy, an energy trader at Dynasty Power in Calgary. 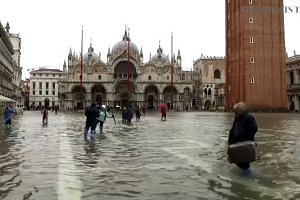 The cold will punch deep into the central and southern US as well, reaching the Gulf of Mexico, said Marc Chenard, a senior branch forecaster at the US Weather Prediction Centre.

On Monday, 1,847 flights were cancelled as the front moved across the US, according to FlightAware, a Houston-based airline tracking service.