WASHINGTON/MEXICO CITY (REUTERS) - Republican lawmakers stepped up calls on Tuesday (March 6) for President Donald Trump to pull back from proposed tariffs on steel and aluminium imports as Senate Majority Leader Mitch McConnell added to an avalanche of criticism of the measures, saying they risked igniting a trade war and damaging the US economy.

McConnell's comments came after House of Representatives Speaker Paul Ryan criticised the proposed 25 per cent duty on steel and 10 per cent on aluminium as too broad. Although the measure is designed to hit China, its main impact will be on US allies like Canada.

The White House has said the measures will protect industries and jobs from unfair competition and that across-the-board tariffs are needed because countries like China use third countries for shipping steel to the United States, disguising its origin.

Opponents charge that the tariffs could destroy more jobs than they create, risk alienating US allies and that American consumers will end up paying more for a range of products from cans of beer to cars.

"There is a lot of concern among Republican senators that this could sort of metastasize into sort of a larger trade war, and many of our members are discussing with the administration just how broad, how sweeping this might be," McConnell said in his first comments on the issue.

Financial markets have rallied off their lows on expectations the measures may be watered down in the face of an intense lobbying effort from leading Republicans, although Trump has so far stuck to his guns in public.

On Tuesday, Representative Mark Meadows, the head of the Freedom Caucus, a staunchly conservative Republican grouping in Congress, raised concerns about the impact of the tariffs on American manufacturing and agriculture. Agriculture is a potential target for retaliatory tariffs from China if Trump pushes ahead.

Meadows, who spoke to reporters after a closed-door meeting with House Republicans, said: "Most of the conversation I heard was not in support of that particular decision."

Those comments came after sharp criticism of the tariffs from Ryan and Representative Mark Walker. Walker heads the Republican Study Committee, which has about 150 members, a majority of the party's lawmakers in the House.

Ryan, whose home state of Wisconsin could be hit by proposed counter-tariffs from the European Union, returned to the attack on Tuesday. He has consistently opposed the tariffs and called for "more surgical and more targeted measures."

Republican Senator David Perdue of Alabama, a close Trump ally, said he had spoken to White House Chief of Staff John Kelly on Tuesday morning and when by asked by reporters about the meeting said he "thinks Trump is open to change." 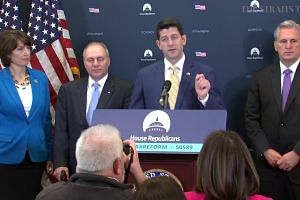 Donald Trump should be 'smarter' on steel tariffs, says US Speaker Paul Ryan

Trump was presented with three options by the Commerce Department. The broad tariffs that he announced last week were one. He also had the option of a much higher duty of 53 per cent on steel imports on a narrower group of 12 countries that did not include Canada, Mexico and the European Union, although all countries would be subject to quotas.

For aluminium, China, Hong Kong, Russia, Venezuela and Vietnam would be subject to direct tariffs and others to quotas.

The final option called for quotas for both industries to limit imports.

Washington said on Monday that if Canada and Mexico agreed to its demands in the Nafta talks, they could be exempted from the proposed steel and aluminium tariffs. The trilateral talks have gone on for six months with few signs of progress.

Mexican Economy Minister Ildefonso Guajardo raised the prospect of reprisals if Washington pushed ahead with tariffs and insisted the North American Free Trade Agreement remain "a trilateral accord" in response to a US proposal to hold talks with Canada and Mexico separately.

"There's a list (of US products) that we are analysing internally, but we won't make it public, we're going to wait,"Guajardo told the Televisa network in an interview.

Canada has also said it would take counter-measures, as has the European Union.

Trump has vowed to cut America's trade deficit and accuses countries like China of cheating. He has launched an investigation into intellectual property abuses by China, a move that could dwarf any impact of the steel and aluminium proposals and trigger a sharp response from Beijing.

Fred Bergstein, who has held top economics posts in a series of US administrations and is a senior fellow at the Peterson Institute for International Economics think-tank, warned on Tuesday that the proposed tariffs would undermine Washington's efforts to rein in China by alienating potential allies.

"President Trump's recent trade actions, especially the announced plans to impose tariffs on steel and aluminium, will have little effect on China. In fact, they will make confronting China with an alliance of trading partners much harder," he said.