ALEXANDRIA (Virginia) • Prosecutors portrayed United States President Donald Trump's one-time campaign chairman, Paul Manafort, as a tax cheat who used offshore accounts to hide tens of millions of dollars earned from doing political work in Ukraine, as the first trial from a probe into Russia's meddling in the 2016 election got off to a quick start on Tuesday.

Manafort lived an extravagant lifestyle, snapping up expensive homes and cars, and spending more than half a million dollars on "fancy clothes" and US$21,000 (S$28,600) on a watch, a prosecutor said in the government's opening statement in a Virginia federal court.

"A man in this courtroom believed the law did not apply to him. Not tax, not banking law," said Mr Uzo Asonye, a member of special counsel Robert Mueller's team looking at possible collusion between Russia and the Trump campaign in 2016.

In describing the 18 counts facing Manafort, Mr Asonye said Manafort did not pay taxes on a large portion of the US$60 million he earned working for pro-Russian politicians in Ukraine, hid the income in a web of 30 overseas bank accounts and lied to US banks to borrow millions of dollars against his real estate holdings once the money from Ukraine dried up.

"All of these charges boil down to one simple issue: that Paul Manafort lied," Mr Asonye said.

Manafort's attorney, Mr Thomas Zehnle, painted a drastically different portrait of Manafort, calling him a successful political consultant of 40 years who left the day-to-day operations of his company to his former associate, Rick Gates, who betrayed him.

Mr Zehnle made it clear that attacking the credibility of Gates, who pleaded guilty in February and agreed to cooperate with Mr Mueller's investigation, would be a central plank of the defence. 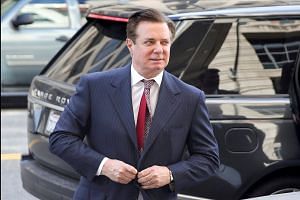 Gates is expected to be a star witness at the trial.

"Rick Gates had his hand in the cookie jar," Mr Zehnle said, claiming that Gates was not truthful with the accountants who prepared Manafort's tax returns and kept his name on offshore accounts to conceal an embezzlement scheme.

Mr Thomas Green, who represents Gates, did not respond to a request for comment on the new accusations.

The government presented its first witness, Mr Tad Devine, a political consultant who recalled his work with Manafort in Ukraine to help pro-Russian political figure Viktor Yanukovych, who was swept from power and fled to Russia in 2014.

Mr Devine, a strategist on Democrat Bernie Sanders' 2016 presidential campaign, described how Manafort used Western-style polling and advertising to lift Mr Yanukovych to victory in a 2010 election. Prosecutors appeared to be using his testimony to establish the nature of Manafort's work in Ukraine.

Outside the courthouse, a handful of protesters displayed a life-size puppet of Mr Trump and held signs saying, "Trump won't do time for you", "It's Mueller time" and "I like your new suit" alongside a photo of Manafort's mugshot.